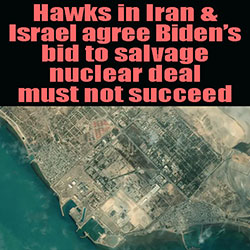 For sworn enemies, Iran and Israel have much in common. Both are regional powers, projecting their interests beyond their borders. Both are beholden, in different ways, to shifting US policy. Both have secretive nuclear programmes. And both are heading towards national elections – in Israel next month, in Iran in June – that could decide whether cold-hearted enmity turns into hot-blooded war.

The stand-off over Iran’s alleged attempts, which are always denied, to acquire atomic bomb-making capacity has gone on for so long that its dangers are often underestimated. Yet the coming days are crucial. Iran has set 21 February as a deadline for an easing of unilateral US sanctions. If it is ignored, Tehran is threatening to ban snap UN inspections of its nuclear facilities and further ramp up proscribed atomic activities.

That could sound the death knell for the 2015 nuclear deal that was negotiated by Barack Obama and European countries, which has slowly unravelled since Donald Trump reneged on it in 2018. Joe Biden says he wants to salvage the deal. Hassan Rouhani, Iran’s centrist president, has offered to negotiate. But each side, trapped by decades of hostility, is insisting that the other takes the first step.

The escalating crisis has brought a flurry of diplomatic activity in recent days, involving Germany and Qatar who are acting as go-betweens. Crucially, the US accepted an EU invitation to join talks with Iran on returning to mutual compliance with the deal. In its response on Friday, Iran’s foreign ministry stuck to its previous position that all sanctions must be lifted before talks can begin

This will not be the last word. But it is a reminder of the sobering – and alarming – reality that powerful individuals and factions on both sides are doing all they can to ensure the 2015 deal definitively collapses. In Iran, hardline candidates and members of the Majlis (parliament), focused on June’s presidential poll, oppose any kind of rapprochement with America.

They include leading presidential hopeful Hossein Dehghan. He reportedly has the backing of Iran’s ultra-conservative supreme leader, Ayatollah Ali Khamenei, who has sworn never to talk to America. Dehghan accuses Biden of bad faith. “We still see the same policies … as we did from the Trump team: not lifting the oppressive sanctions against the Iranian people,” he told the Guardian

Such scepticism reflects genuine distrust, and fear of another Trump-style stab in the back. But it is also the result of calculation, suggested analyst Saeid Jafari . “Biden’s victory [over Trump] came as a big disappointment to hardliners seeking to undermine Rouhani’s last-ditch effort to save the nuclear accord,” he wrote. They may try to scupper any talks.

“They had hoped Trump’s re-election would help them oust reformist and moderate candidates in June … Now hardliners are taking every measure to pave the way for an extremist candidate to come to power … They are doing everything they can to prevent the revival of the nuclear deal.”

Strong opposition to the deal, however Biden plays it, is evident in Israel, where the hard-right prime minister and close Trump ally, Benjamin Netanyahu, is fighting for his political life. Netanyahu encouraged Trump to ditch the pact, even as Israel has expanded its own nuclear facilities. He vehemently warns against resurrecting it as he woos Jewish supremacist parties in Israel’s fourth election in two years.

Netanyahu’s stance is not controversial in Israel, where Iran is viewed as an existential threat. The argument is with Biden and Democrats in Washington.

They have not forgiven the Israeli leader for undermining Obama’s peacemaking efforts. It was no accident Biden waited nearly a month after assuming the presidency before calling Netanyahu last week. The White House is said to privately hope Netanyahu loses.

Jerusalem’s hawks have many supporters in Washington. The veteran neoconservative Elliott Abrams is one. He is urging an uncompromising “policy of deterrence” to subdue Iran, backed by armed force. Biden’s offer to talk has prompted accusations of “appeasement”.

There has been fierce pushback in some quarters over Biden’s appointment of Robert Malley, an ardent advocate of diplomacy over force, as Iran envoy. Concern is also building that Biden’s deliberate distancing from the Saudi crown prince and suspected murderer, Mohammed bin Salman, a close collaborator with Trump and Netanyahu, will be another dangerous gift to Iran.

Last week’s rocket attack on a coalition base in northern Iraq and Houthi drone strikes on Saudi Arabia from Yemen are cited by American and Israeli hardliners as proof that Iran and its allied militias will not halt their regional power-games – and that Biden is naive if he believes that fanatical fundamentalists would honour any settlement.

Additional obstacles to progress include Washington’s wish to expand future negotiations to include Iran’s ballistic missiles, military presence in Syria, and support for Shia militias in Lebanon and elsewhere. Complicating matters, China and Russia will unhelpfully demand a say.

Against all this must be set common sense. Trump’s maximum pressure policy failed miserably. It did not mitigate regional tensions or reduce proxy attacks. Rather, illegal US and Israeli assassinations of high-profile figures increased them. Sanctions have hurt Iranians, but did not topple the regime or change its behaviour. Iran is closer now to a nuclear weapon than in 2016.

Biden’s instinct to try to break this impasse and find a diplomatic way through – supported by the UK, Germany and France – is the right one. But words are not enough. As a sign of good faith, he should swiftly relax some sanctions and unfreeze Iran’s Covid-related $5bn IMF loan request.

Time is short. Proving peace works may be the only way to halt the fatal advance of warmongers in Israel and Iran.