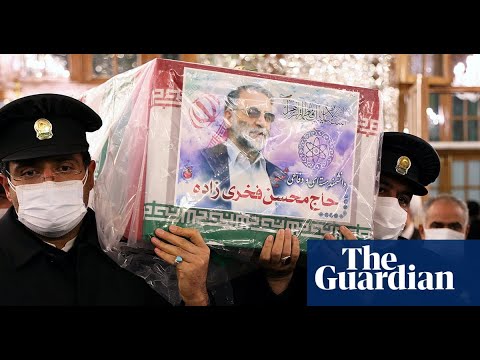 The body of Iran’s most senior nuclear scientist has been prepared for burial as anger at Israel and the US boiled over in the country following his assassination.

Mohsen Fakhrizadeh’s coffin, draped in the Iranian flag and topped with flowers, was transported to a Muslim shrine for prayers and last tributes, the country’s state news reported. His remains will be taken from the Imam Reza shrine to Fatima Masumeh shrine in Qom, south of Tehran, and then to Imam Khomeini’s shrine in the capital, according to the defence ministry.

Fakhrizadeh was killed on Friday on a highway near the capital in a military-style gun and bomb assault that has led to an escalation of tensions in the Middle East. A bodyguard was also killed in the attack. The assassination was carried out using an automatic machine gun operated with a remote control and not with gunmen on the ground, Fars news agency claimed.

Fakhrizadeh’s funeral would be attended by his family and high-ranking military commanders, Iran’s defence ministry said on its website.

Israel has not claimed responsibility or officially commented on the attack. However, Tehran has long blamed its arch-foe for killing several of its nuclear scientists, with Fakhrizadeh considered the most senior, having founded the Islamic Republic’s nuclear programme in the early 2000s.

Iran’s supreme leader, Ayatollah Ali Khamenei, has promised a “definitive punishment of the perpetrators and those who ordered it”, putting Israel on alert for a potential military response in the coming days.

An opinion piece published by a hardline Iranian newspaper on Sunday suggested that Iran should attack Haifa, a port city in northern Israel. The Kayhan newspaper published an opinion piece by an Iranian analyst, Sadollah Zarei, who suggested a strike that destroys facilities and “also causes heavy human casualties”.

Such an attack would be an effective deterrent, he said, “because the United States and the Israeli regime and its agents are by no means ready to take part in a war and a military confrontation”.

Mohammad Baqer Qalibaf, Iran’s parliamentary speaker, said on Sunday that Iran’s enemies must be made to regret the killing. “The criminal enemy does not regret it except with a strong reaction,” he said in a broadcast on Iranian state radio.

While Iran claims that its nuclear programme is non-military and focused on energy, Fakhrizadeh was the subject of US sanctions; Israel’s prime minister, Benjamin Netanyahu, has accused him of leading a secret atomic weapons operation.

The timing of the attack has led to suggestions that Israel, possibly with Donald Trump’s support, is attempting to stop any future attempt by the incoming president, Joe Biden, to reconcile with Iran. To Israel’s dismay, Biden has said he is willing to rejoin the Iran nuclear deal abandoned by Trump and lift some economic sanctions if Iran comes back into compliance with the agreement.

Ben Rhodes, deputy national security adviser when Biden was vice-president to Barack Obama, did not suggest who was to blame for the killing but criticised it as an “outrageous action aimed at undermining diplomacy between an incoming US administration and Iran”.

All future UN inspections of Iran’s nuclear sites should be ended as a result of the assassination of Fakhrizadeh, the Iranian parliament agreed unanimously on Sunday.

The response suggests the 2015 Iran nuclear deal, already breached by Iran’s breaking of the agreed limits on enriched uranium stockpiles, is going to come under severe pressure in the coming weeks as Iran responds to the attack. The parliament said in a reference to Israel that what it described as “the hand of the murderous Zionist regime” could be clearly seen in the assassination.

Tehran said those that thought negotiation with the US was the right path had been proved wrong. The parliament said Iran should withdraw from so-called additional protocol – the measure that gives UN weapons inspectors from the International Atomic Energy Agency (IAEA) access to Iran’s nuclear sites.

Such a move would probably be regarded as the effective end of the nuclear deal by its three European signatories: Germany, France and the UK. Iranian hardliners have long argued that Israeli spies operate within the IAEA inspectorate.

Parliament met in closed session on Saturday to hear an intelligence report on how the assassination happened, and to update on progress with the investigation.

Sunday’s statement on its own creates no legal duty on either the Iranian government or the country’s Atomic Energy Organization, but members of parliament are finalising a bill on the strategic act to revoke sanctions to create that obligation.

Numerous Iranian military and political officials have said Iran will not respond militarily to the assassination at this stage since it would play into the hands of those in Israel and the US wanting to foment a war in the Middle East before Trump stands down in January. But Iran is debating whether the assassination has shown diplomatic negotiations with the Biden administration will be pointless.

The former Democratic presidential candidate Bernie Sanders tweeted: “The assassination of Mohsen Fakhrizadeh was reckless, provocative, and illegal. As a new administration takes power, it was clearly intended to undermine US-Iran diplomacy. We must not allow that to happen. Diplomacy, not murder, is the best path forward.”

Biden has not yet commented, but his allies say he remains committed to the US rejoining the nuclear deal.

The UK foreign secretary, Dominic Raab, during an interview on Sky said the UK had seen no evidence regarding who was responsible for the attack, saying: “We are still waiting to see the full facts of what happened in Iran but I would say that we stick to the rules of international military law, which is very clear against targeting civilians.”

On Saturday the Iranian ambassador to the UK, Hamid Baeidinejad, urged the UK government to unreservedly condemn the assassination of Fakhrizadeh, saying he was a dedicated scientist and that the attack was “a clear violation of the international law as well as human rights’ values and standards”.

Raab said he was willing to meet Iranian leaders to discuss a way forward. He said: “There is an opportunity to look at the JCPOA [the Iran nuclear deal] again with the Biden administration, but there are a series of choices for them to go further and further down the track with its non-compliance with its obligations under the nuclear deal, and … right up to Christmas, I will be meeting with my colleagues, also with Iran, if they are willing to come into the tent, to make sure we hold them to account but also to try and find a peaceful path through.”

Javad Zarif, Iran’s foreign minister, defended the negotiation of the nuclear deal, predicting some of the unnecessary tensions in US-Iranian relations could be removed under Biden. Trump, he said, had contracted his Middle East policy to Netanyahu, creating the worst era in US-Iran relations in 40 years.

Agence France-Presse contributed to this report