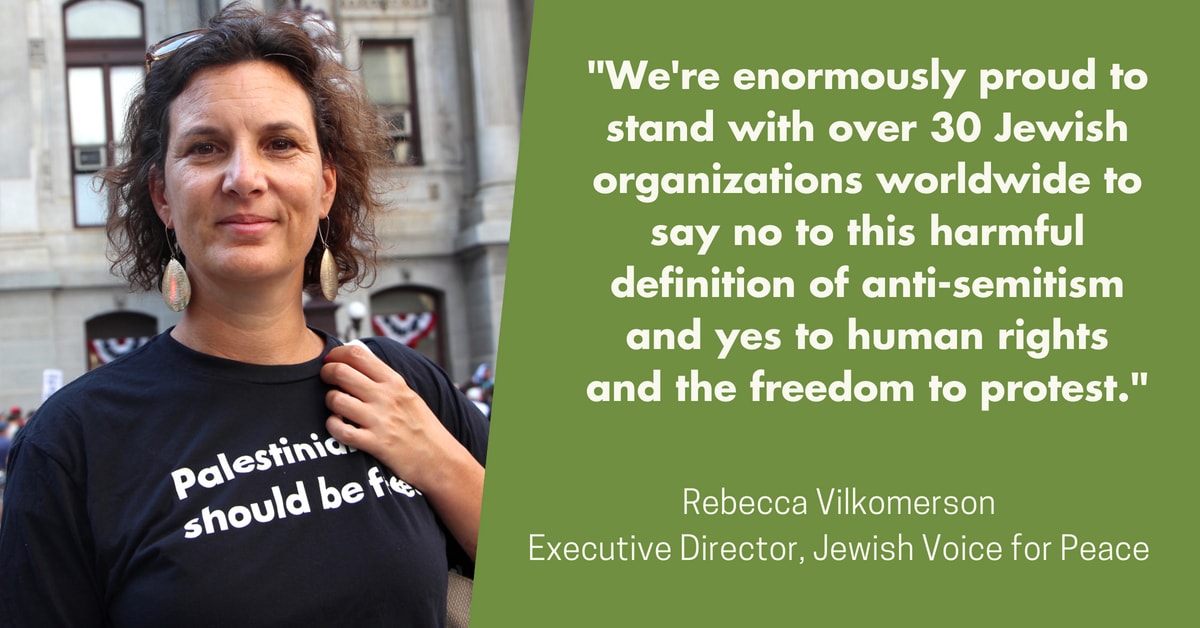 We, the undersigned Palestinian and Arab academics, journalists and intellectuals are hereby stating our views regarding the definition of antisemitism by the International Holocaust Remembrance Alliance (IHRA), and the way this definition has been applied, interpreted and deployed in several countries of Europe and North America.

In recent years, the fight against antisemitism has been increasingly instrumentalised by the Israeli government and its supporters in an effort to delegitimise the Palestinian cause and silence defenders of Palestinian rights. Diverting the necessary struggle against antisemitism to serve such an agenda threatens to debase this struggle and hence to discredit and weaken it.

Antisemitism must be debunked and combated. Regardless of pretence, no expression of hatred for Jews as Jews should be tolerated anywhere in the world. Antisemitism manifests itself in sweeping generalisations and stereotypes about Jews, regarding power and money in particular, along with conspiracy theories and Holocaust denial. We regard as legitimate and necessary the fight against such attitudes. We also believe that the lessons of the Holocaust as well as those of other genocides of modern times must be part of the education of new generations against all forms of racial prejudice and hatred.

The fight against antisemitism must, however, be approached in a principled manner, lest it defeat its purpose. Through “examples” that it provides, the IHRA definition conflates Judaism with Zionism in assuming that all Jews are Zionists, and that the state of Israel in its current reality embodies the self-determination of all Jews. We profoundly disagree with this. The fight against antisemitism should not be turned into a stratagem to delegitimise the fight against the oppression of the Palestinians, the denial of their rights and the continued occupation of their land. We regard the following principles as crucial in that regard:

1. The fight against antisemitism must be deployed within the frame of international law and human rights. It should be part and parcel of the fight against all forms of racism and xenophobia, including Islamophobia, and anti-Arab and anti-Palestinian racism. The aim of this struggle is to guarantee freedom and emancipation for all oppressed groups. It is deeply distorted when geared towards the defence of an oppressive and predatory state.

2. There is a huge difference between a condition where Jews are singled out, oppressed and suppressed as a minority by antisemitic regimes or groups, and a condition where the self-determination of a Jewish population in Palestine/Israel has been implemented in the form of an ethnic exclusivist and territorially expansionist state. As it currently exists, the state of Israel is based on uprooting the vast majority of the natives – what Palestinians and Arabs refer to as the Nakba – and on subjugating those natives who still live on the territory of historical Palestine as either second-class citizens or people under occupation, denying them their right to self-determination.

3. The IHRA definition of antisemitism and the related legal measures adopted in several countries have been deployed mostly against leftwing and human rights groups supporting Palestinian rights and the Boycott Divestment and Sanctions (BDS) campaign, sidelining the very real threat to Jews coming from rightwing white nationalist movements in Europe and the US. The portrayal of the BDS campaign as antisemitic is a gross distortion of what is fundamentally a legitimate non-violent means of struggle for Palestinian rights.

4. The IHRA definition’s statement that an example of antisemitism is “Denying the Jewish people their right to self-determination, eg, by claiming that the existence of a State of Israel is a racist endeavour” is quite odd. It does not bother to recognise that under international law, the current state of Israel has been an occupying power for over half a century, as recognised by the governments of countries where the IHRA definition is being upheld. It does not bother to consider whether this right includes the right to create a Jewish majority by way of ethnic cleansing and whether it should be balanced against the rights of the Palestinian people. Furthermore, the IHRA definition potentially discards as antisemitic all non-Zionist visions of the future of the Israeli state, such as the advocacy of a binational state or a secular democratic one that represents all its citizens equally. Genuine support for the principle of a people’s right to self-determination cannot exclude the Palestinian nation, nor any other.

5. We believe that no right to self-determination should include the right to uproot another people and prevent them from returning to their land, or any other means of securing a demographic majority within the state. The demand by Palestinians for their right of return to the land from which they themselves, their parents and grandparents were expelled cannot be construed as antisemitic. The fact that such a demand creates anxieties among Israelis does not prove that it is unjust, nor that it is antisemitic. It is a right recognised by international law as represented in United Nations general assembly resolution 194 of 1948.

6. To level the charge of antisemitism against anyone who regards the existing state of Israel as racist, notwithstanding the actual institutional and constitutional discrimination upon which it is based, amounts to granting Israel absolute impunity. Israel can thus deport its Palestinian citizens, or revoke their citizenship or deny them the right to vote, and still be immune from the accusation of racism. The IHRA definition and the way it has been deployed prohibit any discussion of the Israeli state as based on ethno-religious discrimination. It thus contravenes elementary justice and basic norms of human rights and international law.

7. We believe that justice requires the full support of Palestinians’ right to self-determination, including the demand to end the internationally acknowledged occupation of their territories and the statelessness and deprivation of Palestinian refugees. The suppression of Palestinian rights in the IHRA definition betrays an attitude upholding Jewish privilege in Palestine instead of Jewish rights, and Jewish supremacy over Palestinians instead of Jewish safety. We believe that human values and rights are indivisible and that the fight against antisemitism should go hand in hand with the struggle on behalf of all oppressed peoples and groups for dignity, equality and emancipation.

Board of Trustees, Birzeit University, Palestine

Professor of Anthropology and Social theory, University of Melbourne, Australia

Professor of Politics and IR, University of Oxford, UK

Professor, Deptartment of Gender and Women’s Studies, University of Illinois at Chicago, USA

Filmmaker, Chair of The Palestinian Museum & the A.M.Qattan Foundation, UK

Lecturer in Comparative Politics of the Middle East, SOAS, University of London, UK