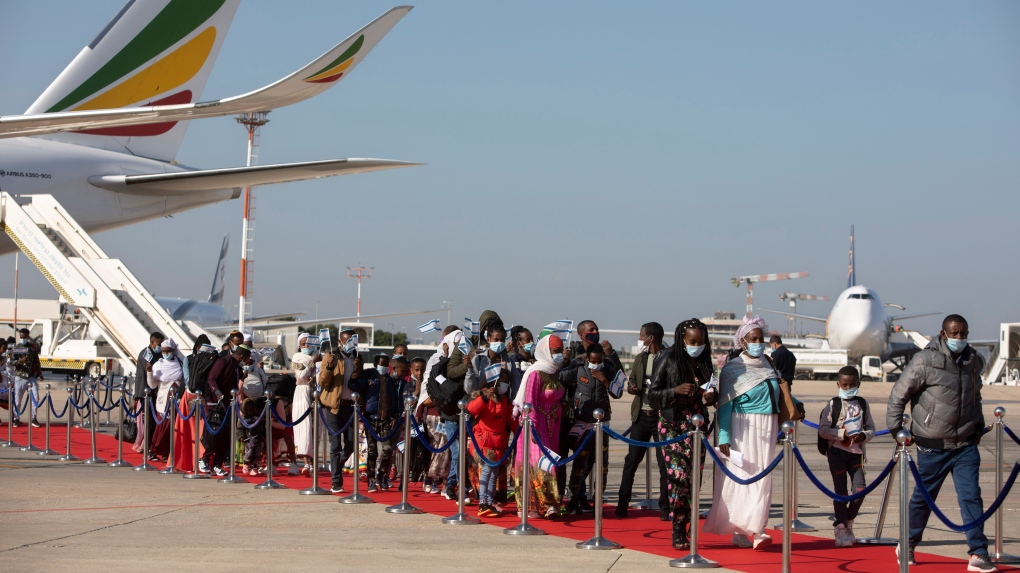 Hundreds of immigrants from Ethiopia have arrived at Israel’s main international airport, as the Israeli government took a step towards carrying out its pledge to reunite hundreds of families split between the two countries.

About 300 people landed on the Ethiopian Airlines flight on Thursday, with many waving flags or stopping to kiss the ground as they stepped off the aircraft on to a red carpet at Ben Gurion airport. Many were dressed in traditional Ethiopian robes, and many women held babies in their arms. Festive Hebrew songs were played over loudspeakers.

Although the families are of Jewish descent and many are practising Jews, Israel does not consider them Jewish under religious law. Instead, they were permitted to enter the country under a family unification programme that requires special government approval.

A large delegation of Israeli officials welcomed the group, and Pnina Tamano-Shata, Israel’s first Ethiopian-born cabinet minister, travelled to Ethiopia to join them on the flight.

“My wife, Sara, and myself were standing there with tears in our eyes,” Israel’s prime minister, Benjamin Netanyahu, said at a welcoming ceremony. “This is the essence of our Jewish story, the essence of the Zionist story.”

Community activists have accused the government of dragging its feet in implementing a 2015 decision to bring all remaining Ethiopians of Jewish lineage to Israel within five years. Netanyahu’s Likud party repeated that pledge before national elections this year.

Activists for Ethiopian Aliyah, a group promoting family unification, estimates about 7,000 Ethiopian Jews remain behind in Ethiopia, some of whom have been waiting for years to join their families.

“Once again, the government led by Prime Minister Netanyahu has decided to place quotas on the immigration of Jews from Ethiopia,” said Muket Fenta, an activist who has been fighting for more than a decade to bring his aunt to Israel.

“The government is celebrating a few hundred immigrants from Ethiopia, while thousands were supposed to be here and are still left behind while their fate is in question,” he said.