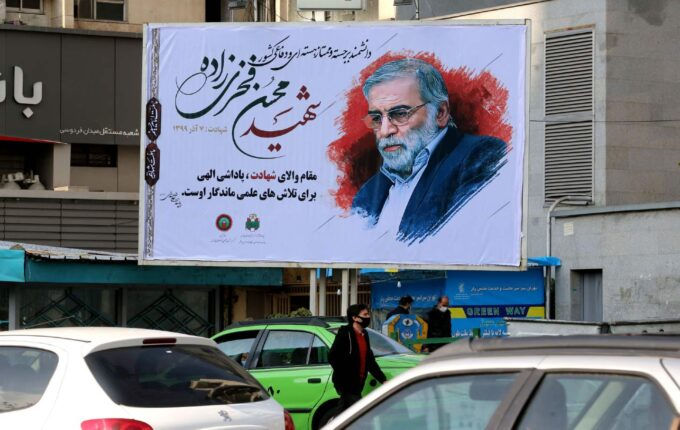 The assassination of Iran’s top nuclear scientist, Mohsen Fakhrizadeh, on 27 November, which is likely to have been carried out by Israel, was intended to undermine the possibility of a quick US-Iran detente once the president-elect, Joe Biden, takes office in January. It’s part of a scorched earth campaign by Benjamin Netanyahu and Donald Trump to make it as difficult as possible for Iran to resume negotiations with the Biden administration and return to the 2015 nuclear agreement.

But the brazen killing is also designed to exploit rifts within Iran’s factional political structure: between conservative politicians and hardline factions aligned with the Islamic Revolutionary Guards Corps, and the reformist camp led by the president, Hassan Rouhani. In January, the US assassinated Iran’s most powerful general, Qassem Suleimani, in a drone strike outside Baghdad’s airport. That attack exposed weaknesses in Iran’s security apparatus and the regime was unable to follow through on threats to avenge the targeting of its top officials. Iran did fire missiles at US bases in Iraq in retaliation for Donald Trump ordering – and later boasting about – Suleimani’s killing. But that was a largely symbolic act and Tehran has not targeted a US official of equal stature, as it threatened to. Since Fakhrizadeh’s assassination, hardliners have been calling for tougher action in order to restore some deterrence with Israel and, by extension, the US.

In a speech on 29 November, Mohammad Bagher Ghalibaf, the parliament speaker and a conservative leader, warned that a “strong response” was the only way to deter future attacks. He also cautioned Iranians against “sending any signals indicating weakness”. Hossein Salami, the top commander of the Revolutionary Guards, vowed at Fakhrizadeh’s funeral: “Enemies should be awaiting our revenge.” The hardline Kayhan newspaper, whose editor was appointed by Iran’s supreme leader, Ayatollah Ali Khamenei, published an opinion article urging the Iranian leadership to attack the Israeli port city of Haifa if it concludes that Israel assassinated the nuclear scientist. The article argued that Tehran’s previous responses to Israeli attacks had not gone far enough.

These fiery denunciations are not unusual, especially from hardliners, after an attack on Iranian interests attributed to Israel or the US. But leaders of the military establishment, conservative politicians and analysts are signalling to the supreme leader, who has the final say on Iran’s foreign policy and nuclear programme, that even if it waits out the final weeks of the Trump administration without retaliating, Tehran can’t negotiate with Biden from a position of weakness. That vulnerability has been exposed by the recent assassinations and a series of mysterious explosions and fires at Iranian facilities connected to its nuclear enrichment programme.

The perception of exposed weakness could lead the Iranian regime to launch a series of escalations – revenge attacks against Israeli targets; advancing its nuclear enrichment; using allied militias in Iraq to attack US troops there; or risky skirmishes with US forces in the Persian Gulf – to try to establish an upper hand to show the world and the Biden administration that it is not weak. Many of these options carry the risk of a wider confrontation, especially if they’re carried out in the waning days of the Trump administration.

And Tehran has failed at some past attempts at retaliation. From 2010 to 2012, Iran blamed Israel’s Mossad for assassinating at least four of its leading nuclear scientists, part of a wider sabotage campaign against Iran’s nuclear programme. In February 2012, Iranian agents tried, and largely failed, to carry out revenge attacks against Israeli targets in India, Thailand and Georgia.

If the hardliners’ rhetorical message is that Iran should exact revenge to avoid appearing weak, internally they’re trying to undermine Rouhani’s ability to negotiate with the Biden administration. The conservatives argue that Rouhani will essentially be a lame duck since Iran is scheduled to hold presidential elections in June 2021. Rouhani, who was first elected in 2013, will have served two terms and is not eligible to seek re-election.

The conservatives are jockeying to reassert their control over the presidency. In February, conservatives and hardliners swept a majority of the new parliament, winning 220 out of 290 seats. The election was marred by problems: more than 90% of reformist candidates were disqualified by the Guardian Council, an oversight body controlled by the supreme leader, and voter turnout was 42.6%, the smallest of any parliamentary election since the 1979 Iranian revolution. Some conservative politicians are pushing for the next president to come from the ranks of the Revolutionary Guards or another part of the military establishment. It’s possible that the Guardian Council may block any reformist candidate from even running.

The Iranian election means that the Biden administration has only a few months after it takes office on 20 January to reach an agreement to return to the joint comprehensive plan of action, under which Tehran had agreed to limit its nuclear programme in exchange for relief from international sanctions. In May 2018, Trump unilaterally withdrew the US from the deal and imposed new sanctions that crippled Iran’s economy.

While some Iranian officials, such as Rouhani and his foreign minister, Javad Zarif, may view Biden as far more predictable than Trump, others in the Iranian regime are wary of restarting negotiations that can be undone by future US administrations. Already, Biden’s top foreign policy aides have said that in order for the US to re-enter the nuclear agreement and provide sanctions relief, Iran must commit to follow-up negotiations on broader issues, including Iran’s ballistic missile programme and support for militant groups in the region. That will be difficult even for moderates to accept, with Iran’s presidential election months away. And it’s likely to be a nonstarter for the supreme leader, who wants to project a sense of strength.

The other variable in the coming weeks is whether Netanyahu’s government will carry out more provocations that seek to further exploit Trump’s recklessness and divisions within Iran. Fakhrizadeh’s assassination highlighted Israel’s ability to act with relative impunity, especially in evading criticism from the US and much of Europe. The killing is likely to have been in violation of international law, as Agnes Callamard, the UN rapporteur on extrajudicial killings, noted on Twitter. Even a former CIA director, John Brennan, lashed out at the targeting of an Iranian official, saying if a foreign government was responsible, it would be “an act of state-sponsored terrorism”.

The top scientist’s killing may not set back Iran’s technical capabilities, but it could weaken and humiliate the moderate Iranian factions that are most open to rapprochement with a new US administration.