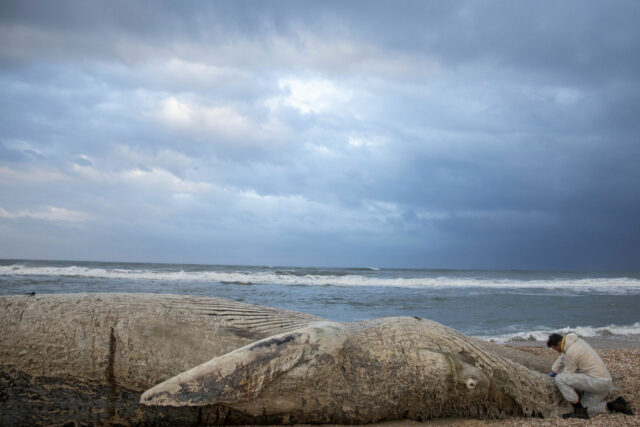 Israel’s environmental protection minister has said Iran was responsible for a recent oil spill that ravaged its shores and has claimed – without evidence – the incident was a form of “environmental terrorism”.

Gila Gamliel said after a two-week investigation aimed at “getting our hands on the criminal ship” responsible for the tar slick, her ministry had identified a Panama-flagged tanker called Emerald, which was smuggling oil from Iran to Syria in breach of international sanctions.

The vessel sailed through the Gulf and the Red Sea with intermittent radio and satellite tracking contact before dumping oil in the eastern Mediterranean between 1 and 2 February, she told reporters on Wednesday. It is now anchored in Iran, she added.

“After reducing the number of suspects in the incident, we discovered that it was not just an environmental crime – but environmental terrorism,” Gamliel later tweeted.

Reuters reported the vessel was purchased by Emerald Marine Ltd, a company based in the Marshall Islands, citing the shipping database Equasis. The Guardian has been unable to reach the company for comment.

The minister is a member of the party of Israel’s prime minister, Benjamin Netanyahu. However, her accusations were not repeated by other officials and she did not provide details of why she believed the spill was intentional, rather than an accident. Iran did not comment on the claims.

Over the past two weeks, thousands of Israeli volunteers have attempted to clean up toxic black deposits on beaches from what officials believe could have been a 1,000-tonne crude oil spill.

The head of Israel’s nature and parks authority, Shaul Goldstein, said it was “the worst environmental disaster in a decade”. Beachgoers have found baby turtles and fish covered in black sludge. Oily sand has also been found on the coast to the north, in Lebanon, a country Iran considers to be an ally.

Ship tracking data from Refinitiv showed the Emerald reported its position after passing through the Suez Canal on 1 February and again in Turkey two days later, suggesting it passed near Israel around the time Israeli officials believe the spill occurred.

The Israeli environmental protection ministry said it had “circumstantial” rather than “forensic” evidence that this was the ship behind the spill. It added it had ruled out any other source.

A growing conflict between Israel and Iran has heated up in recent years. Israel has bombed hundreds of Iranian targets in neighbouring Syria, and Tehran accused its enemy of assassinating its top nuclear scientist last year.

On Monday, Netanyahu said Iran had attacked an Israeli-owned ship in the Gulf of Oman last week. “Iran is the greatest enemy of Israel. I am determined to halt it. We are hitting it in the entire region.” Iran denied the claim.

Reuters contributed to this report