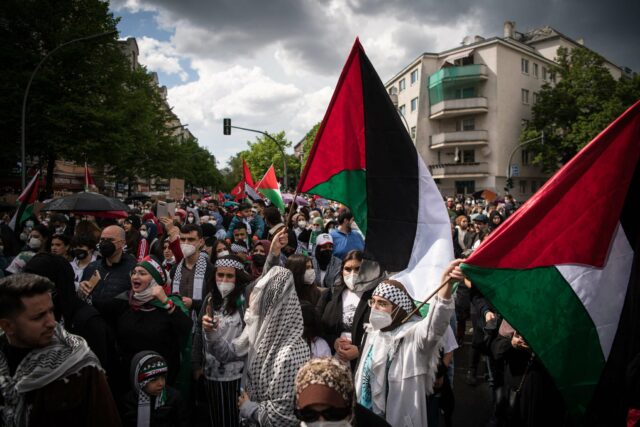 As Joe Biden toured a Ford factory to highlight his push for more electric vehicles on Tuesday, protests erupted in parts of Michigan over the escalating clashes between Israelis and Palestinians.

Biden’s visit to the plant in Dearborn was no coincidence. The state and region have deep roots in the American auto industry and would be one of the primary locations for production of a new era of electric vehicles. Biden’s visit also came ahead of Ford rolling out an electric version of its F150 pickup truck, one of the company’s most famous products.

“I just got a tour of a groundbreaking electric vehicle center here alongside UAW workers,” Biden said at the Rouge center. “They showed me the technology they’re using to build the fully electric F150 … The future of the auto industry is electric. There’s no turning back.”

Biden added that “the American auto industry is at a crossroads. The real question is if we’ll lead or we’ll fall behind in the race to the future.”

But Biden’s visit to Michigan to tout his domestic priorities came under the shadow of bombings in Gaza City and Israel.

On Monday, the Washington Post reported that in the weeks ahead of the most recent fighting the Biden administration had quietly approved selling $735m worth of precision-guided weapons to Israel. That fact in particular came up repeatedly at the pro-Palestinian protests in Dearborn, which has one of the largest concentrated Arab communities in the country.

At one of the protests outside a police station here, hundreds gathered to decry Israel’s brutal treatment of Palestinians, waving flags and carrying signs. Some of the attendees blamed Biden himself and cited the weapons sales.

“We are a loving, welcoming people, but you are not welcome in Dearborn today,” said Amer Zahr, president of the New Generation of Palestine group, said of Biden.

“We know that Biden is here in Dearborn at the Ford plant so we want him to hear our voices and hear that he needs to ceasefire, cut the funding that is happening right now,” said Zeyna Salloum, 37.

Salloum brought a sign that said Biden is a war criminal. “He’s supporting the bombing of civilians with American money,” she added.

Others said they attended the protest to bring awareness to Palestinian identity.

“I’m here to support a free Palestine with my kids to teach them how to participate and how they love their origin of country,” Ramiz Karwash, 41, said with his daughter sitting on his shoulders. He stressed he was there to send Biden a message about he bombings and the war in Gaza.

The conflict has divided lawmakers on Capitol Hill, with Republicans largely stressing support to Israel and some Democrats doing the same, while others called for better treatment of the Palestinian people. Biden himself has reportedly privately told the Israeli prime minister, Benjamin Netanyahu, that he could only hold off applying pressure on how Israel interacts with the Palestinian government for so long.

Abdul El-Sayed, a public health doctor, liberal activist and former Democratic candidate for governor of Michigan, spoke at the police station protest on Tuesday said his hope was “obviously that we need a ceasefire immediately”.

“I hope that this ends peacefully immediately,” he said. “My worry is that once the immediate atrocities being committed end that we will walk away and the same kinds of policies of displacement, of human rights violations are going to continue.”