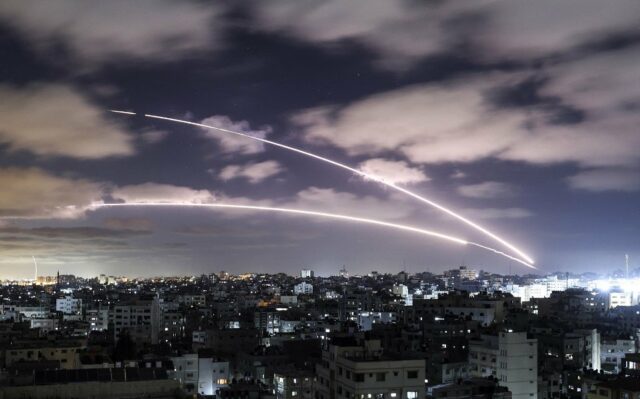 Egypt has urged a brokered end to the fighting between Israel and militants in Gaza, and France has called for a UN security council resolution on the violence, as international pressure for a ceasefire intensifies.

The US has so far stopped short of demanding an end to the clashes, confining its public efforts to urging that attacks are scaled back. Washington has repeatedly blocked efforts before the UN security council to draft joint statements calling for the fighting to end. The latest US rejection came at a security council meeting late on Tuesday that again ended without a statement, as airstrikes and rocket fire continued into the night.

However, signs are emerging that a ceasefire may be within sight, with the Egyptian effort gaining momentum among factions in Gaza, and the prime minister, Benjamin Netanyahu, reported by Israeli media to have told officials in the south of the country that the fighting could end “within several days”.

Jordan, too, has lobbied intensively for a cessation of violence and has joined a French push at the UN to present a draft resolution that safeguards urgent humanitarian relief. The US would have to use its veto power to block the resolution, something the Biden administration would be reluctant to do.

During Tuesday’s closed-door meeting – the fourth since the conflict escalated over a week ago – the US envoy Linda Thomas-Greenfield said: “We do not judge that a public pronouncement right now will help de-escalate”, AFP quoted a diplomatic source as saying.

Israeli jets on Wednesday continued to pound what officials say is an extensive tunnel network under central Gaza used by Hamas to move fighters and weapons. The al-Rimal neighbourhood was also targeted and residents reported that several homes had been been destroyed. Israel claimed it had twice tried to kill Hamas military commander, Mohammed Deif, but the elusive leader – who had previously escaped many other assassination attempts – had escaped.

The intensive pre-dawn strikes marked the third round of attempts to destroy tunnels, which Israeli military commanders say have been central to the Hamas campaign, which has seen close to 3,500 rockets fired into Israel since the fighting began.

After an overnight lull, rocket fire resumed shortly after dawn. Hamas said the latest barrage was aimed at Israeli airforce bases. Israel claimed 50 rockets had been fired and said none had caused damage. Two more barrages were fired at southern and central Israel on Wednesday morning.

During a visit to an airbase in Israel’s south on Tuesday, Netanyahu said Hamas and Islamic Jihad had “received blows they did not expect” that had set them back “many years” and that the operation would continue as long as necessary to restore calm.

On Tuesday, there was fresh unrest throughout the region, with serious clashes in Jerusalem and the occupied West Bank as Palestinians took part in a day of protests and strikes over Israel’s bombardment of Gaza.

A Palestinian man was killed and more than 70 wounded, including 16 by live fire, in clashes with Israeli troops on the outskirts of Ramallah, according to the Palestinian Authority health ministry. Two Israeli soldiers were injured.

Hundreds of Palestinians burned tyres and hurled stones at an Israeli military checkpoint. Troops fired teargas canisters at the crowd. Large crowds also gathered in Nablus, Bethlehem, Hebron and other towns in the West Bank.

In Jerusalem, police deployed water cannon in the neighbourhood Sheikh Jarrah, where Palestinian families are facing eviction from homes they have lived in since the 1950s. The threat of eviction has been a key factor in rising tensions in the city over recent weeks. There were also clashes at the nearby Damascus Gate entrance to the Old City.

Many Palestinian-owned businesses in the Old City were shut as part of a “day of anger” over the eight-day conflict. Support for the general strike was high in towns inside Israel.

Israeli airstrikes have killed 217 Palestinians, including 63 children, and wounded more than 1,400 people in just over a week in the Hamas-run enclave, according to Gaza’s health ministry.

Randa Abu Sultan, 45, said her family no longer knew what sleep was. “We’re all terrified by the sound of explosions, missiles and fighter jets,” said the mother of seven. “We all sit together in a single room. My four-year-old son tells me he’s scared that if he falls asleep he’ll wake up to find us dead.”

On Tuesday, the Norwegian Refugee Council said 11 of the children killed in Gaza were participating in a programme it runs to help young people deal with trauma. “As an urgent measure, we appeal to all parties for an immediate ceasefire so that we can reach those in need and spare more civilians,” said NRC’s secretary general, Jan Egeland. “But the truth is that there can be no peace or security as long as there are systemic injustices.”

The death toll on the Israeli side has risen to 12 after rockets Hamas fired at the southern Eshkol region killed two Thai nationals working in a factory, police said.

Before the latest UN meeting, Jake Sullivan, the national security adviser to the US president, Joe Biden, said Washington was engaged in “quiet, intensive diplomacy”.