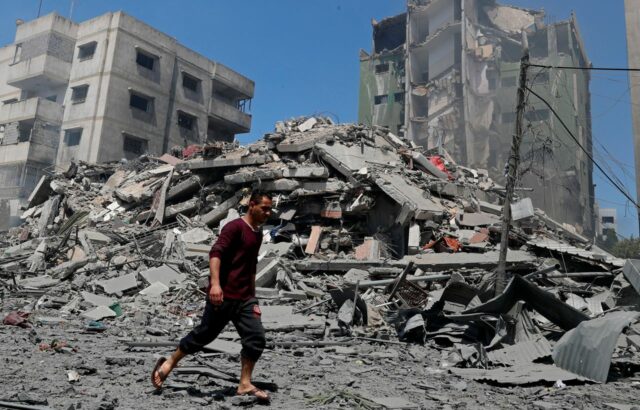 Joe Biden has told Benjamin Netanyahu that he expects “a significant de-escalation today on the path to a ceasefire” between Israel and militants in Gaza, in a notable toughening of the US president’s language on the conflict.

The White House said that in a phone call on Wednesday, “the two leaders had a detailed discussion on the state of events in Gaza, Israel’s progress in degrading the capabilities of Hamas and other terrorist elements, and ongoing diplomatic efforts by regional governments and the United States.”

It added: “The president conveyed to the prime minister that he expected a significant de-escalation today on the path to a ceasefire.”

But in a statement issued swiftly after the White House disclosed the call, Netanyahu said he was “determined to continue this operation until its objective is achieved: to restore quiet and security to you, citizens of Israel”.

He added that he “appreciate[d] the support of our friend, US President Joe Biden, for the state of Israel’s right to self-defence”.

Both sides in the conflict earlier denied that a truce was imminent. Israeli media speculated that a ceasefire could be in force from early on Thursday, but Izzat al-Rishak, a senior Hamas figure, said there was no agreement. Israeli officials also rejected the suggested timing.

Israel’s army radio reported that the security cabinet was expected to meet in the coming hours to discuss a possible end to the nine-day-old conflict, in which more than 200 Palestinians and 12 people in Israel have been killed.

The number of missiles fired by both sides fell for a period on Wednesday morning, raising hopes of an imminent end to the conflict. No rockets were fired from Gaza for a period of several hours. But three mortar shells were later fired at the Kerem Shalom border crossing as a consignment of humanitarian aid and medical equipment sent by Jordan was in transit. Israeli officials halted the shipment until further notice.

Israeli officials said it was the second time in 24 hours that Hamas had fired at shipments of humanitarian and medical aid entering Gaza.

In pre-dawn strikes, Israeli jets pounded what officials say is an extensive network of tunnels under central Gaza used by Hamas to move fighters and weapons. Israeli military commanders say the tunnels have been central to the Hamas campaign, in which close to 3,500 rockets have been fired into Israel since the fighting began.

Al-Rimal neighbourhood was also targeted and residents reported that several homes had been destroyed. At least nine people were killed in the Gaza Strip on Wednesday.

Israel said it had twice tried to kill the Hamas military commander, Mohammed Deif, but the elusive leader – who has evaded a number of assassination attempts – escaped.

The Israeli military also shelled an area across the country’s northern border with Lebanon from where four rockets were fired. The Israel Defence Forces said artillery was striking “a number of targets in Lebanese territory”.

On the diplomatic front, Egypt, Qatar and the UN were attempting to mediate between the two sides. In a joint statement, France, Egypt and Jordan said they “called on the parties to immediately agree on a ceasefire”. They said they would work with the UN and other partners to ensure humanitarian help for the population of Gaza.

At the UN, the US blocked a united security council call for a ceasefire for the fourth time. Having blocked three statements last week, the US mission to the UN said it would not support a French-drafted resolution calling for a cessation of hostilities and access for humanitarian agencies.

“We’ve been clear and consistent that we are focused on intensive diplomatic efforts under way to bring an end to the violence and that we will not support actions that we believe undermine efforts to de-escalate,” a spokesperson for the US mission told Reuters.

The UK government is “fully committed” to trying to bring about a ceasefire and reduce tensions in the region, the Foreign Office minister, James Cleverly, told parliament. He condemned “acts of terrorism by Hamas and other terrorist groups”, saying there was “no justification for targeting civilians”. Israel had a “legitimate right to self-defence”, but “it is vital that all actions are proportionate”, he said.

In a televised address, Mahmoud Abbas, the Palestinian president, accused Israel of carrying out “organised state terrorism and war crimes” in Gaza. Palestinians “will not hesitate to pursue those who commit such crimes in front of international courts”, he said.

Israel said an explosion that killed eight members of a Palestinian family on the first day of fighting last week had been caused by a misfired rocket from Gaza, not an Israeli airstrike.

Speaking anonymously on Wednesday, a senior military officer said an investigation had concluded that Israel did not strike the Beit Hanoun area where the family members were killed. The officer added that one in five rockets launched by militants landed inside Gaza.

On Tuesday an Israeli airstrike knocked out the only laboratory in Gaza that processes Covid tests. The Gaza health ministry said it had salvaged Covid vaccines and relocated test processing to another clinic.