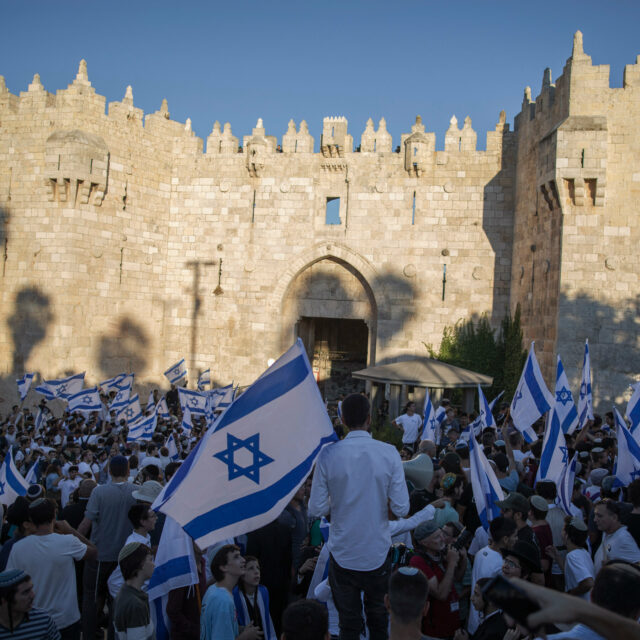 Israeli police have blocked a planned march by Jewish nationalists through Palestinian neighbourhoods of Jerusalem after a similar parade last month played a key role in building the tensions that led to the latest Gaza conflict.

In a statement, police said a permit for a different time or route might be considered.

The decision came as Israel faced an anxious week ahead, with an opposition coalition pushing forward in its attempts to oust the prime minister, Benjamin Netanyahu.

The fragile and ideologically diverse new government may not be voted on in the Knesset until 14 June, said the parliament speaker and Netanyahu ally Yariv Levin on Monday, giving the prime minister more time to knock it down.

In the past few days, security officials have expressed alarm at a rise in incitement and hate speech from voices on the hard right who are angered that the proposed government – while headed by a far-right nationalist, Naftali Bennett – includes Arab and left-wing politicians.

Netanyahu, who has been in power for 12 consecutive years, has done little to calm the situation. On Sunday, he accused the coalition of “election fraud”, as Bennett had promised during the campaign not to sit with left-wing or Arab parties. Netanyahu suggested that people “justifiably feel deceived and they are responding”.

The head of the opposition, Yair Lapid, who negotiated the coalition, attempted to appeal to rightwing voters on Monday. “I want to speak to Netanyahu’s supporters,” he said. “I know that the formation of the unity government is a crisis for some of you, but you’ll discover that this government isn’t being created against you.”

As the political drama unfolded, fired-up far-right groups prepared to parade through the Old City on Thursday to flaunt Israel’s control of the holy city, which it captured in its entirety during a 1967 war and now claims as its “undivided capital”.

Previous events have seen participants angrily bang on shuttered doors and chant anti-Arab slogans as they descend through the Muslim quarter.

Organisers complain that they were unable to properly hold the march as they usually do on Jerusalem Day, a national holiday that this year came during a steep rise in tensions related to Israel’s occupation.

On 10 May, as a weeks-long police crackdown on Palestinian protesters and the potential eviction of families from the Sheikh Jarrah neighbourhood came to a climax, Israeli authorities decided at the last moment to reroute the march away from Arab districts.

However, the decision did little to calm an already spiralling situation. That evening, the parade was interrupted by air raid sirens after Hamas militants in the Gaza Strip fired rockets – the opening salvo of what would become 11 days of intense fighting. More than 250 people were killed in Gaza and 13 in Israel before a ceasefire took effect on 21 May.

After police announced on Monday that this week’s march would not go ahead, Hamas, an Islamist group, celebrated the decision, saying it showed that Israel understood that issues around the holy city constituted a red line.

In Israel, Bezalel Smotrich, leader of the hard-line Religious Zionism alliance, tweeted a warning to Netanyahu “not to give in to Hamas threats”. There were also signs of discontent within Netanyahu’s own Likud party. The lawmaker Miki Zohar said the cancellation was a “surrender to terrorism”, and the public security minister, Amir Ohana, suggested the decision could be reversed.

“I hear about the complexities and difficulties, and still believe that the decision should be raised to the political level due to its importance,” he said.