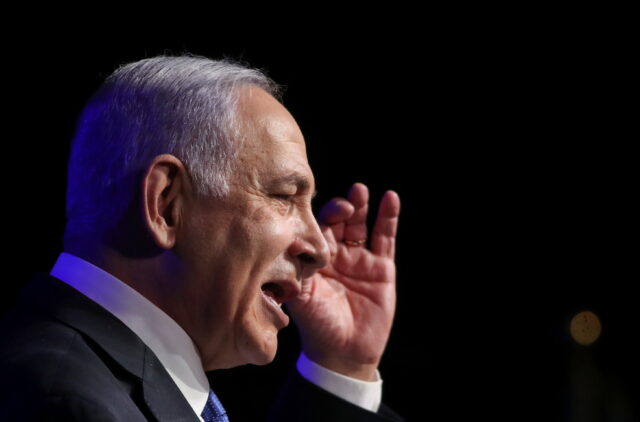 Benjamin Netanyahu has said a newly formed Israeli coalition that is poised to unseat him as prime minister was the result of “the greatest election fraud” in the history of democracy.

The sweeping accusation, similar in tone to those made about the US election by his former close ally Donald Trump, came as Israeli security services warned of an escalation in violent discourse in the country.

In power for 12 consecutive years, the Israeli prime minister faces being toppled by a diverse coalition of lawmakers united only by their shared hostility towards him.

Mired in a court battle on corruption charges that could lead to imprisonment, the veteran politician has mobilised his supporters to peel off defectors before a confirmation vote.

Netanyahu focused his allegations on a broken campaign promise from the man set to replace him as prime minister, nationalist Naftali Bennett.

Bennett had pledged not to partner with leftwing, centrist and Arab parties, but on Wednesday announced with opposition leader Yair Lapid that they had formed a governing coalition with factions from across the political spectrum.

“That’s why people justifiably feel deceived and they are responding: they must not be shut up,” he said in the remarks, which were broadcast live and referred indirectly to Bennett’s campaign promise not to team up with Lapid and others.

“This discourse could be understood by certain groups or individuals as enabling illegal violence that could even cost a life,” Argaman said, calling on public officials to “issue a clear call to stop this discourse”.

Politicians opposing Netanyahu and some local media have interpreted Argaman’s statement as a warning to the premier.

“There is a very thin line between political criticism and inciting violence,” Netanyahu said on Sunday.

Netanyahu claimed he was the target of an “even more serious” campaign and described the coalition that seeks to replace him as a “dangerous leftwing government”.

The alliance comprises three rightwing, two centrist and two leftwing parties as well as an Arab Islamic conservative party. Under the coalition agreement, Bennett of the rightwing nationalist Yamina party would be premier for two years, to be replaced by the centrist Lapid in 2023.

Netanyahu’s supporters have been working hard to win defections from Yamina deputies uncomfortable working with Arabs and Jewish leftwingers. Some have held demonstrations outside the homes of Yamina lawmakers.

A parliamentary vote of confidence, the last step to formalise the new government, could be held on Wednesday or the following Monday, according to Israeli media.

Meanwhile Israeli police burst into the home of a prominent family in the contested Sheikh Jarrah neighbourhood of Jerusalem on Sunday, the family said, arresting a 23-year-old woman who has led protests against attempts by Jewish settlers to evict dozens of Palestinian families from their homes in the area.

The woman was later released, but her twin brother turned himself in and remains in custody.

Earlier this year, heavy-handed police actions in Sheikh Jarrah and other parts of East Jerusalem fuelled weeks of unrest that helped spark an 11-day war between Israel and Hamas militants in the Gaza Strip.