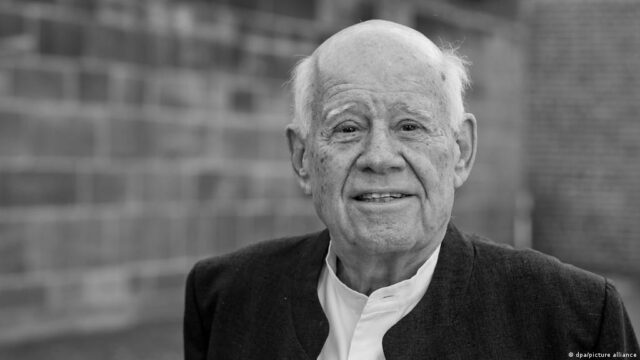 An environmental piece over 3km long, titled Axe Majeur (1980-ongoing), in the French town of Cergy-Pontoise, north-west of Paris; Passages (1990-94), a memorial to the philosopher Walter Benjamin in Portbou, Spain; Murou Art Forest (1998-2006) in Japan; and Way of Human Rights in Nuremberg, Germany (1989-93), are among the most celebrated works designed by the artist Dani Karavan, who has died aged 90.

Karavan practised various art forms, including painting and drawing, stage-set design and wall reliefs, but it was environmental sculpture, a new medium that emerged in the 1960s and to which he contributed significantly, that brought him fame. He created more than 70 environmental pieces in Israel, Europe and east Asia, some of which became tourist attractions and pilgrimage sites.

What they have in common is how the work affects the viewers. A visit to these sculptures moves the visitor physically and emotionally, generating an experience imprinted on the memory and often inspiring their own artistic creation. In High Maintenance – the Life and Work of Dani Karavan (2021), a film by Barak Heymann, the German director Wim Wenders says: “I love that in his work he leaves so much space for every viewer to dream himself or herself in it.”

Karavan’s initial approach was key. “I arrive at a site and the site speaks to me. I hear the site,” he said. His careful attentiveness resulted in his incorporating local elements from the urban or natural environment: trees and vegetation, stones, water and wind, sound, light and shade, as well as the history and memories of the place. He described one of his early works, the Negev Monument in the southern city of Beersheba (1963-68), as “a sculpture that people could climb and walk on, touch, hear, smell and see. A sculpture using all the senses that constitute the experience.”

The son of Zehava and Avraham Karavan, Dani was born in Tel Aviv, then a still small but fast-growing city in pre-state Israel. He often mentioned the sand dunes that surrounded the city of his childhood as his early inspiration. His father, the city’s chief gardener, designed many of its public spaces.

In his youth Karavan studied painting with Marcel Janco in Tel Aviv and later in the Bezalel School of Art in Jerusalem under Mordecai Ardon. His early paintings reveal the sensibility to social and political injustice and human rights issues that would later become a major concern and lead him into peace activism.

In 1948 Karavan and his friends in the youth movement Hashomer Hatzair founded Kibbutz Harel, where he lived until 1955. He then went to Florence to study fresco at the Accademia di Belle Arti, and to the Académie de la Grande Chaumière art school in Paris.

In the mid-60s Karavan created his first important public works, among them the wall relief Pray for the Peace of Jerusalem (1965-66) in the assembly hall of the Knesset, Israel’s parliament, in Jerusalem and the Negev Monument.

During the 50s and 60s he had designed stage sets for theatre and dance companies, among them the Israeli Batsheva company and the American Martha Graham company. This had a profound influence on his artistic perception. His environmental sculptures often function as stage sets where the visitors are actors “choreographed” to move in and around the geometric and natural elements. This effect was first manifested in the Negev Monument, commissioned to commemorate the soldiers of the Negev Brigade who were killed in battle during the 1948 war of independence.

Various shapes and structures made of concrete were scattered on a desert hilltop north of Beersheba, symbolically representing the fighter’s world. Commemorating the dead, however, was not the only goal, as Karavan wrote years later: “My aim was to create a site that people would enjoy visiting, spending time there in order to discover the place, and through it, to discover the landscape and themselves.”

In the 70s Karavan started exhibiting in Europe, taking part in the Venice Biennale in 1976 and Documenta 6 in Kassel in 1977. At a solo show in Florence in 1978, his abstract language crystallised into pyramids, towers and steps, with a blue laser beam running from the Belvedere fort to the cathedral dome. Following this show he was commissioned to produce the Axe Majeur in France, his most ambitious piece, started in 1980 and still ongoing.

One of his most poetic and delicate works is the Sinti and Roma memorial in Berlin (2000-12), consisting of trees, sound, texts and a circular pond in the middle of which a fresh wild flower is placed every day. Currently the work is at risk due to a new underground line planned to pass directly beneath it. There are plans, too, to take over half of Karavan’s Square of Culture (2005-13) in Tel Aviv for work on a railway line.

Karavan was honoured with numerous awards and prizes and in 1995 was named the first Unesco Artist for Peace.

In 1955 he married Hava Fogler. She survives him, along with their daughters, Noa, Tamar and Yael, and two grandchildren.