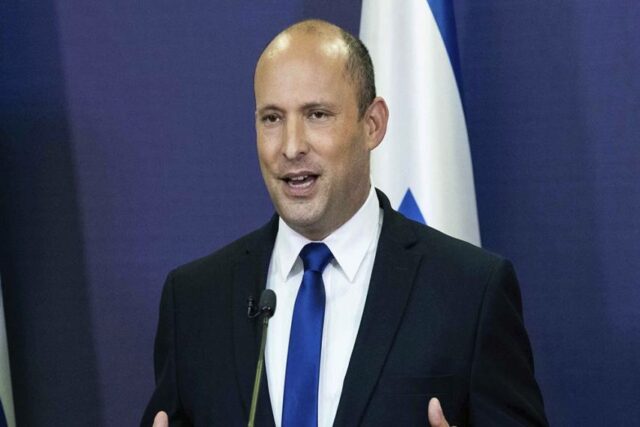 Israel’s longest-serving leader, Benjamin Netanyahu, has been ousted from office by a loose coalition of rivals from across the political spectrum, united by their wish to end his 12-year run in power.

The opposition leader, Yair Lapid, a centrist former TV news anchor, won a confidence vote in the Knesset, Israel’s parliament, by a razor-thin advantage of 60-59 seats on Sunday evening.

Lapid will not initially become prime minister. Instead, under a power-sharing agreement, his former foe and far-right advocate for the settler movement in the Palestinian territories, Naftali Bennett, was sworn in as the country’s leader.

Bennett, who has ruled out a Palestinian state and wants Israel to maintain ultimate control over all the lands it occupies, will be prime minister for the first two years of a four-year term before handing over to Lapid.

The self-described “government of change” is a mix of ideologically opposed politicians from hardline Jewish religious nationalists to a small Arab Islamist party.

Ahead of the Knesset vote, Bennett attempted to give a conciliatory speech, even as Netanyahu’s allies heckled him from their seats. The 49-year-old prime minister-designate thanked the outgoing leader for his “lengthy and achievement filled service”.

Speaking after Bennett, Netanyahu struck a different tone, first boasting that he had transformed Israel “from a marginal country to a rising force” and then slamming Bennett as weak in comparison.

Netanyahu said he would work in the opposition to “topple this dangerous government” and return to power.

Hours later, after the vote had passed, Netanyahu, wearing a black face mask, stood up from his seat and shook Bennett’s hand to congratulate him. Then the outgoing prime minister walked across the room to an area designated for the opposition, where he will now be required to sit.

Installing the new administration breaks a political deadlock that has seen four snap elections since 2019. During that time, Netanyahu, who is famed for his political skills, managed to keep his rivals bickering and divided while he clung to power, even after he was indicted in three criminal corruption cases on charges he denies.

However, in the process the 71-year-old isolated allies on the right, including Bennett, who was Netanyahu’s former chief of staff and served in his governments.

Sever Plocker, a columnist for Israel’s leading daily newspaper, Yedioth Ahronoth, wrote that Netanyahu was ultimately responsible for his own downfall.

“Over the past few years, he became his own greatest enemy: his egocentrism, his personal and public paranoia, his avarice, his ongoing incitement and his hubris unified the opposition to him from across the political spectrum to the point that they joined forces to successfully bring him down.”

Anti-Netanyahu protesters, who have held rallies outside the prime minister’s residence in Jerusalem for months calling for his ousting, gathered again on Saturday night to celebrate. A black banner stretched across a wall read: “Bye Bye, Bibi, Bye bye.”

And on Sunday night, after the new government was voted in, thousands of Israelis waving the blue and white flag cheered and danced in central Tel Aviv.

Bennett will lead an unlikely assortment of eight parties, including the anti-occupation and dovish Meretz but also parties led by other hawkish figures on the right, such as Avigdor Lieberman, a Moldova-born settler.

Critically, the coalition includes Arab Islamist members of parliament, who joined for the shared aim of dethroning “King Bibi”, as Netanyahu is known. In doing so, the United Arab List, which is made up of Palestinian citizens of Israel, will become the first party from the country’s sizeable Arab minority ever to join a government.

The party’s leader, Mansour Abbas, is seen as a pragmatist and said he had secured guarantees from hard-right coalition partners for greater rights for Palestinian citizens of Israel, including on discriminatory housing policies, as well as several billions of pounds for infrastructure in Arab areas.

Other Arab politicians in Israel have accused Abbas of abandoning his principles.

Among Palestinians in the occupied territories, including blockaded Gaza, Netanyahu’s departure has been welcomed. But there is little optimism around the new government.

Meanwhile, Bennett has been branded a traitor by some politicians on the religious right, who accused him of abandoning his ideology in order to join Jewish “leftists” and Arab politicians.

Bennett’s speech to the Knesset was repeatedly delayed on Sunday as rightwing politicians screamed “Crook!” and “Liar!” Two were dragged out by security.

Published coalition agreements showed the new government would focus mostly on economic and social issues, such as passing a state budget and building new hospitals, rather than risk an internal fight by trying to address the Israeli-Palestinian conflict. However, Bennett will have executive powers as prime minister to further solidify the occupation.

Regardless, shortly after the vote, Joe Biden released a statement congratulating Bennett and Lapid. The US president said he was “fully committed to working with the new Israeli government to advance security, stability, and peace for Israelis, Palestinians, and people throughout the broader region”.

His corruption cases include charges of fraud, bribery and breach of trust and could lead to a decade in prison. Now in opposition, Netanyahu might be denied parliamentary immunity.

Facing such an outcome, Netanyahu has sought to break up the coalition by persuading lawmakers to defect – efforts that he will continue in the coming days and weeks. If the government loses its narrow majority and collapses, it could trigger another snap election and potentially save Netanyahu’s career.

The government’s first major test will be on Tuesday when a parade attended by far-right Jewish nationalists is set to march through Palestinian neighbourhoods of Jerusalem.

Israeli police had changed the route to avoid the Muslim quarter of the Old City after a similar march last month played a key role in building the tensions that led to the latest Gaza conflict. However, the planned march will still pass through Arab areas and is seen as deeply provocative.