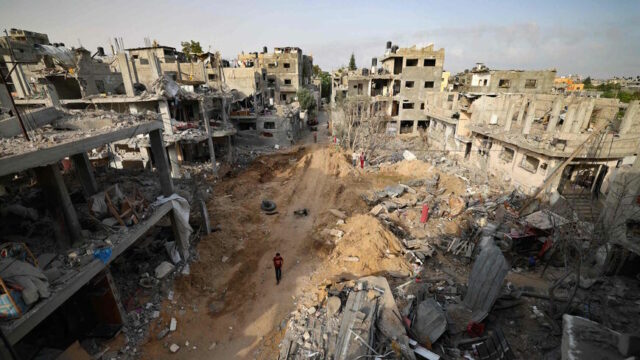 I often tell my first-year politics students that the study of politics is the study of power. And what we saw last month, above all, was the glaring disparity in power between Israel and the Palestinians.

When Palestinians in Gaza and around the world celebrated the news of a ceasefire, breathing a sigh of relief, many commentators hailed it as a return to calm. For Palestinians, however, “calm” means a status quo of occupation, blockade, and repression.

In fact, one can say the true nature of this conflict is what happens between the periodic escalations – the constant grind of life under apartheid. Israeli power over the Palestinians is not simply military, and it is not only maintained by force; it is sustained by international support. The significance of this support becomes obvious during Israeli military offensives – last month, the US wilfully obstructed a UN security council statement on Gaza to buy more time for Israel’s bombing campaign – but the key elements of this international support are consistent.

The most substantial diplomatic and financial support comes from the US – $3.8bn (£2.7bn) annually, most of which is in military aid and circulates back to the US arms industry. International governments’ support for Israel has continued even as Israeli political and military leaders have been accused of serious violations of international law and the illegal use of force – abuses serious enough to warrant an international criminal court investigation.

The UK has also given Israel its full backing. While Britain has a particular legacy in the conflict, as the former colonial power in historical Palestine, support continues today with a thriving arms trade between the two states. Approved export licences for arms sales from the UK to Israel cover components for small arms, ammunition, night-sight technology and intelligence.

The UK also imports Israeli-made weapons. For example, in 2016, Israel’s major arms producer, Elbit, in conjunction with Thales UK, completed delivery on most of the 54 Watchkeeper drones as part of an £800m contract. Between 2018 and 2020 the British Ministry of Defence bought £46m worth of military equipment from Elbit. Such weapons are marketed as “battle-tested” – demonstrating the ways that day-to-day violence against Palestinians spurs a profitable industry with international reach.

According to Campaign Against Arms Trade, between 2016 and 2020, the UK issued single individual export licences for arms sales to Israel to a value of £400m. This is a significant increase from the £67m in licences from 2011 to 2015.

Last month in Leicester, campaigners occupied the rooftop of UAV Tactical Systems, a subsidiary of Elbit Systems. Elbit Systems UK has nine production sites and offices in the country. The Leicester facility manufactures the Hermes drone that has been used by Israel’s military in Gaza. Campaigners managed to disrupt production for several days before another protest started against an Elbit factory in Oldham.

These actions highlight just how much Britain is entwined with Israel’s military power. Within innocuous buildings hidden in industrial estates in England, one of Israel’s major private weapons firms operates freely, with no consequences for how its weapons are used in Palestine or elsewhere.

The quintessential British company JCB, which makes bulldozers, was one of three British firms listed by the UN as complicit in the construction of illegal settlements and demolition of Palestinian homes. JCB is currently being “examined” by the UK government to determine whether its due diligence process complies with human rights guidelines set by the Organisation for Economic Co-operation and Development.

While Israel portrays itself as a small state simply acting in self-defence, in reality it is carrying out a decades-long military occupation, denying Palestinian refugees the right to return and continuing to displace hundreds of families. It has one of the strongest militaries in the world, aided and abetted by the backing of international powers. This is why Palestinians have appealed to people of conscience around the world to protest against such blatant complicity with Israel’s violations of human rights and international law.

British-based organisations such as War on Want and Campaign Against Arms Trade have called for an end to military exports to Israel and a review of UK arms sales. This is an important step in challenging the unequivocal support Israel receives in military aid while it continues to violate Palestinian rights daily. When MP Zarah Sultana held up pictures of Palestinian children killed during the latest assault on Gaza and directly asked Boris Johnson if UK-made weapons were used in the bombardment of Gaza, he did not deny it. But he quickly deflected the question with a string of platitudes about Britain’s support for a two-state solution.

The endless lip service to the two-state solution rings hollow as the US, UK and EU assist Israel in creating facts on the ground that have made it functionally impossible – including ongoing illegal settlement construction, land confiscation, displacement, restrictions on Palestinian movement and the incarceration of thousands of Palestinians. Hiding behind the smokescreen of “quiet diplomacy”, these states continuously undermine Palestinian attempts to hold Israel to account; Boris Johnson, for example, has opposed the international criminal court inquiry into atrocities committed in the West Bank, Gaza and East Jerusalem.

In the face of this, Palestinians can only point out the hypocrisy as they continue to protest. The general strike called on 18 May by all Palestinians was a heartening moment of unity, breaking the barriers imposed by military checkpoints and walls. Palestinians also rely on the power of ordinary people around the world willing to speak out and challenge thecomplicity of their own governments in maintaining this conflict. The demonstrations around the world, across many capitals and small towns – and the statements of solidarity by trade unions, artists and academics – attest to the fact that more and more people are coming to understand the status quo is untenable.

Some may choose to avert their eyes after Gaza, Jerusalem, Lydd (Lod) and Haifa are no longer dominating the headlines. But Palestinians do not have that option. Ending the arms trade with Israel is a crucial step for unmasking the illusion of “calm” that obscures the ongoing oppression of Palestinians, and for honestly confronting Britain’s role in maintaining this brutal status quo.