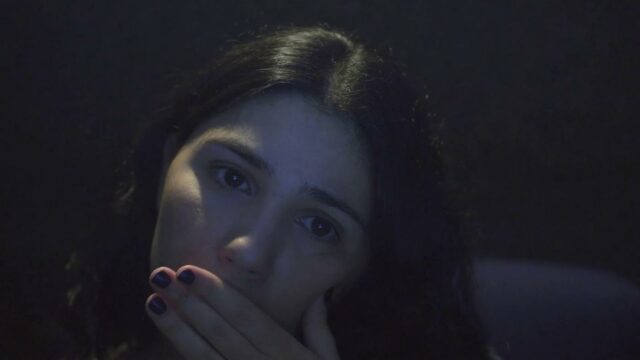 Even though he tries to maintain a cool, scientific demeanour, Israeli director Ra’anan Alexandrowicz finally lets slip a twinge of despair at the end of this interesting geopolitical Rorschach test. Alexandrowicz sits studiously behind a monitor as he invites a succession of volunteers to enter an adjacent booth. There, they have a choice of 40 clips to watch, snippets of life in Israel, while he asks them to share their thoughts on what they see. Half of the clips are from rightwing Israeli sources; the other half are from B’Tselem, an Israeli human-rights organisation that aims to document abuses of power in Palestinian territories.

Alexandrowicz quickly zeroes in on the pensive Maia, a Jewish American who supports Israel, but brings an insistent scepticism to everything she watches. He is the director of pro-Palestine documentaries such as The Inner Tour (2001) and The Law in These Parts (2011) – and believes her to be his ideal audience: a possible convert.

From the sympathy she displays on watching flagrant abuses such as a soldier kicking a street kid, that seems like a realistic hope. But it’s quickly apparent that Maia filters everything through confirmation bias. When one child seems to misremember his own name in a B’Tselem video of a home search by Israeli soldiers, she wonders whether it has been staged.

At the same time as interrogating the film-makers’ agenda, Maia is also aware of her own possible distortions, which stem from a desire to believe that Israeli actions are justified. Above and beyond the Middle Eastern context, this is the kind of due diligence – a state of permanent alertness about film-maker and viewer, their intentions and baggage – that our information-saturated age demands of all of us.

Alexandrowicz brings Maia, with a sleek new haircut, back for a second session, to review the footage and her own initial reactions. But she doubles down, saying: “Sometimes when you question your beliefs and you come up with better answers, they reinforce your beliefs even more.” The director, on the back foot, just about clings to his sang-froid.

Not just a valuable crash course in digital-age hermeneutics, this is a gauntlet thrown down to film-makers with an old-fashioned belief in the truth.