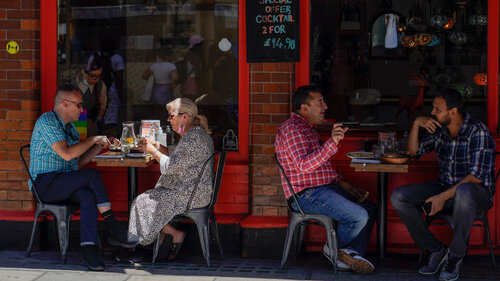 Israel and the UK were viewed as world leaders in their coronavirus vaccine campaigns but whereas the former is lifting almost all pandemic limitations, the latter is now glumly extending its restrictions in England amid a sharp rise in infections.

Despite starting its mass inoculation programme after the UK in December, Israel has sped ahead and it reached a key milestone on Tuesday, scrapping a requirement to wear face masks indoors, one of the final Covid limitations.

With theatrical flair, the director general of the ministry of health, Hezi Levi, removed his mask in a live TV interview for what he said was the “last time”, as the presenter chuckled.

After running the world’s fastest Covid vaccination campaign, the country of 9 million people has administered two shots of the Pfizer/BioNTech vaccine to well over half its population. Daily life has returned almost completely to its pre-pandemic state, with shops, restaurants, hotels, concerts and cinemas all fully open.

Only 25 people tested positive for Covid on Monday, according to health ministry figures, and there are only 221 people in the whole country who are confirmed as having coronavirus. Fewer than 20 people have died from the disease in the past month.

In stark comparison, the UK recorded more than 7,700 daily cases on Monday, when the government announced that the final easing of restrictions in England would have to be delayed by four weeks.

Vast differences between the two countries, not only in population size but also cultural behaviour, access to vaccines, housing density and vaccine hesitancy, make comparisons difficult.An international debate around Israel’s obligations to unvaccinated Palestinians under occupation has also led to questions around whether its campaign can be branded a success.

Still, Israeli and British vaccination rates are not wildly different, raising questions around what went wrong and what went right. In Israel, 60% of the population has had one dose, and nearly 57% have had both. In the UK, slightly more – 62% – have had one dose, although only 44% have had two.

Oliver Geffen, an Israeli epidemiologist who has worked for Imperial College London and Public Health England, said it was vital to look deeper into the data.

“Two key differences between Israel and the UK are that Israel has a much higher rate of second dose vaccinations, and that vaccine rates are more evenly spread in the population,” he said. In Israel, he said, 77% of those 20-29 have had their second dose, while in the UK that figure is closer to 15%.

“This could be creating pockets of individuals that are susceptible to getting infected which may be driving the re-emergence of infections,” Geffen said. The recent rise in UK cases has been largely centred on people aged under 39, with particular concern over the spread in schools.

Geffen said the Delta variant in the UK could also “partially account” for the rise in cases.

While Israel has low case numbers now, variants have also hampered its efforts. The country suffered its worst rise in infections in January, even after its vaccine drive was in full force – an event blamed on the Alpha variant.

It responded by quickly shutting its borders to non-residents, a policy that largely remains in place. And while the Delta variant has been detected in Israel, it has not got out of control as it has in the UK, where the government was slower to act on curbing global travel.

Adi Niv-Yagoda, an expert in health policy at Tel Aviv University and a member of the health ministry’s Covid-19 advisory panel, said the UK’s decision to delay the second dose of the vaccine may have also affected its national campaign.

“Israel used two doses of the Pfizer vaccine,” he said, adding that the country abided by the company’s 21-day protocol for spacing the two jabs. “This is not an evidence-based correlation but we can see it is acting differently.”

Research results on different dosing methods has been mixed. One Israeli study showed two doses of the Pfizer vaccine have proved more than 95% effective against infection compared with 58% for one dose. However, a UK study found delaying the second dose might actually improve immunity in over-80s.