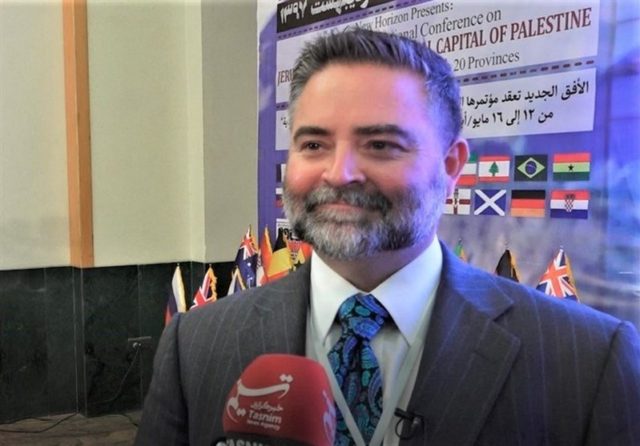 “Netanyahu knows that if Israel engages in any ground war in Lebanon or Syria—or anywhere else for that matter—Israel will lose catastrophically and show the world it is nothing more than a ‘paper tiger’ and all bluster and threat with no ability to back them up,”Scott Bennett, from San Francisco, told Tasnim.

His educational background includes a Bachelor of Science in Advertising and Spanish Minor from San Jose State University in California, a Master of Arts in International Business and Public Policy from George Mason University in Virginia, and a Ph.D. (ABD) in Political Theory from the Catholic University of America in Washington D.C. He currently resides in California.

The following is the full text of the interview.

Tasnim: Head of Israel’s far-right Yisrael Beiteinu party Avigdor Liberman resigned as defense minister, protesting Israel’s “too-soft policy” on Hamas. Liberman took his five-member party out of the ruling coalition and called for new elections. Leaving the government with 61 seats in the Knesset, barely a majority out of 120, this stirred discussion among politicians and observers about whether Israel would have to go to elections now or wait until November 2019, the requisite date according to law. Can Benjamin Netanyahu keep the coalition together? And if not, can he win the election and gain a fifth term as prime minister?

Bennett: As the Middle East wars in Syria and Yemen continue to sour against the West and degrade the reputation of Israel and Saudi Arabia in general, Benjamin Netanyahu will be increasingly seen as a liability and problem to the Israeli people, rather than an asset and solution. Besides the Zionist Mossad involvement with the 9/11 attacks against America, with the rise of the internet media has come the explosion of amateur photographic evidence showing Israel and Saudi Arabia’s particular genocidal wars against Yemen and Syria, the unlawful shooting down of Russian planes, and indiscriminate bombings and destruction of civilians by Western airstrikes. All of this footage has served to incline the public away from sympathizing or trusting the Israeli-Saudi public relations or propaganda campaigns. Additionally, Netanyahu and his wife are coming under increasing investigation for potential criminal irregularities and corruption charges associated with his tenure as Prime Minister. All of this is creating an atmosphere around Netanyahu that is becoming too toxic and odious for the public to endure, or Israel’s reputation to survive.

Tasnim: According to reports, Netanyahu has sought to avoid Gaza and prioritizes the status quo. He wasn’t looking for escalation or to use military force as an electoral prop, because if Israel got bogged down in an extended fight or Israeli civilians died as a result of Hamas retaliatory rocket fire, then his credibility would be shot. What do you think?

Bennett: Netanyahu knows that if Israel engages in any ground war in Lebanon or Syria—or anywhere else for that matter—Israel will lose catastrophically and show the world it is nothing more than a “paper tiger” and all bluster and threat with no ability to back them up. We see Israel now losing aircraft in Syria, thanks largely to the Russian and Iranian assistance to the Syrian government. Netanyahu also knows that the American people are quickly losing all support for America’s involvement in the Saudi-Israeli Middle East wars, or rather genocide, against Yemen and Syria. This was demonstrated most recently by the US Senate voting to suspend military assistance to Saudi Arabia, and Senator Rand Paul’s speech on the Senate floor characterizing Saudi Arabia as evil, and Iran as not a threat to America. Israel sees this as the end of its own “credit” and blank check which has been given it by Americans. No more.

Tasnim: Why do you think Netanyahu does not favor early elections?

Bennett: Early elections of course will reflect all of these sentiments and would be a sure disaster that removes Netanyahu for corruption, graft, war crimes, and possibly treason. The people living in Israel also recognize that the days of endless war and expansionism of Israeli settlements is not a policy the world will allow any longer, and Netanyahu has endangered the lives of Israelis more than any other Prime Minister with this propaganda and lies against Iraq, Iran, and his manipulation of America into a series of wars that are terrible humanitarian disasters for Europe and the Middle East.

Tasnim: Contrary to popular belief, the United States isn’t a major factor in Israeli elections as the ruling coalition is breaking up and still no help from the US to the PM. What is your take on this?

Bennett: Trump recognizes that his foolish actions of having US troops in Syria and the firing of US cruise missiles at Syria in response to a “false flag” chemical attack which was blamed on President Assad, but which was later proven to be a lie and actually done by the White Helmets, is a war crime that may come back to haunt him. He sees the Senate abandoning this war policy of supporting the Saudis and Israel because Yemen is turning into a humanitarian disaster, and this will become both Trump’s legacy and doom his presidency to one term if he does not remove himself. Trump is now looking for ways to do that, while at the same time not “losing face” or disturbing his political base which unfortunately seems to be blindly and ignorantly pro-Zionist. However, once again it seems this too is changing given the enormous destruction and failure of America’s policies in the Middle East, and Netanyahu is fast becoming the scapegoat for Americans to pin all of their blame upon. As the approaching 9/11 legal investigations take place in New York, and the resulting Iranian legal filings to dismiss any legal cases and judgments against them for 9/11, we could easily see the emergence of new evidence, witnesses, and testimony which once and for all shows the Israeli Zionist involvement in this infamous war crime, and Netanyahu being arrested or killed for it. The last 18 years of war were clearly started by the Zionist Likud party and betrayed the trust of the American people with lies and wars. This is now becoming more and more apparent to Americans, and it is Netanyahu who is being seen as the conspirator and criminal who must not only be removed from political life but indeed removed from the earth for his acts of evil if the earth is to have peace.