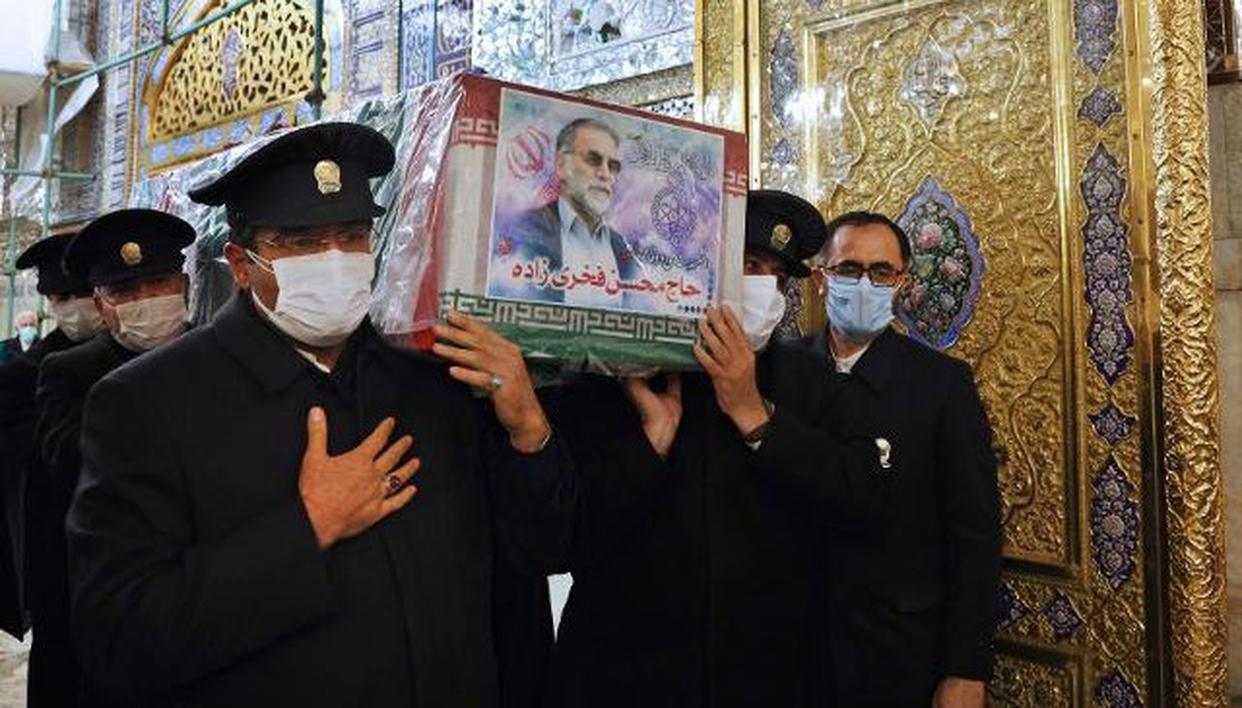 Iran has bestowed martyr status on the nuclear scientist Mohsen Fakhrizadeh at a full state funeral in Tehran, vowing to redouble his work after an assassination blamed on its arch-foe Israel.

In footage carried by state TV, Fakhrizadeh’s casket was shown surrounded by flowers and pictures of him, alongside portraits of Qassem Suleimani, the commander of the Islamic Revolutionary Guards Corps killed by a US drone strike in Baghdad in January.

An honour guard carried Fakhrizadeh’s body to a podium, where reciters read the Qur’an and other religious verses in an outdoor area of the defence ministry.

Officials, including the defence minister, Gen Amir Hatami, attended the ceremony, sitting apart from each other and wearing masks because of the coronavirus pandemic. Owing to the scale of the pandemic in Iran, the crowds were kept largely socially distanced and relatively small.

Fakhrizadeh died after an elaborately planned ambush on Friday on the outskirts of Tehran.

Ali Shamkhani, the secretary of the country’s supreme national security council, accused Israel on Monday of using “electronic devices” in the attack. “Unfortunately, the operation was a very complicated operation and was carried out by using electronic devices. No individual was present at the site,” he said.

The semi-official Fars news agency also claimed that were no assailants at the scene and that Fakhrizadeh was fired on by an automatic remote-controlled machine-gun, placed in a pickup car 150 metres away. Two bullets hit him in the side and one in the back, Fars claimed, and a bodyguard that came to cover him was also shot multiple times.

Fars said the entire operation lasted no more than three minutes, and ended with the pickup car exploding. Other news sites claimed the weapons were activated by satellites.

The claims drastically change the story of Fakhrizadeh’s killing. Authorities initially said a lorry exploded and then gunmen opened fire on the scientist, killing him. State TV even interviewed a man on the night of the attack who described seeing gunmen open fire.

Iranian state TV claimed on Monday, without providing evidence, that a weapon recovered from the scene bore “the logo and specifications of the Israeli military industry”.

None of the outlets offered evidence supporting their claims, which also give authorities a way to explain why no one was reportedly arrested at the scene, or how a foreign backed hit squad could operate on Iranian soil.

Iranian intelligence agencies have come under pressure to explain how such a prominent figure could have been assassinated in broad daylight on a highway so close to the capital.

Officials have tried to put a lid on the debate by urging political parties not to use the scientist’s death as an opportunity to settle factional scores or jockey for position ahead of the presidential elections next year.

The killing of Fakhrizadeh – described by Israel as the “father” of Iran’s nuclear weapons programme – has once more heightened tensions between Tehran and its foes, with Iran’s president, Hassan Rouhani, accusing Israel of acting as Washington’s “mercenary”.

Israel, long suspected of killing Iranian nuclear scientists over the last decade, has declined to comment on the killing.

Iran has always denied it has any interest in developing nuclear weapons, saying its research was for peaceful purposes. This claim was reiterated by Hatami on Monday, who also vowed: “No crime, no assassination and no stupid act will go unanswered by the Iranian people. They must know that they will be punished for their actions.”

As a symbol of Iran’s defiance, Hatami said the defence ministry’s research and innovation budget had been doubled next year. Fakhrizadeh had led the research department.

Rouhani has stressed his country would seek its revenge for the assassination in “due time” and not be rushed into a “trap”, with less than two months to go before the US president, Donald Trump, leaves office after four hawkish years at the White House.

The US president-elect, Joe Biden, has promised a return to diplomacy with Iran, after Trump unilaterally withdrew from the Iran nuclear deal in 2018 and began reimposing crippling sanctions.

The Iranian parliament has said all future UN inspections of Iran’s nuclear sites should be ended as a result of the assassination.

The response suggests the nuclear deal, already breached by Iran by breaking the agreed limits on enriched uranium stockpiles, is going to come under severe pressure in the coming weeks as Iran responds to the attack.

The parliament said Iran should withdraw from so-called additional protocol – the measure that gives the UN weapons inspectors from the IAEA access to Iran’s nuclear sites. The existing signatories to the nuclear deal – Iran, France, Germany the UK, Russia and China – will meet in Vienna on 16 December to discuss how to preserve the deal, and whether Europe can pave the way for the US to rejoin the deal.

Donald Trump’s son-in-law, Jared Kushner, is visiting the Middle East this week, reportedly in an attempt to persuade Saudi Arabia and Qatar to end their three-year geopolitical dispute, which has split the Gulf Cooperation Council, and shown Arab states pointing in different foreign policy directions.

Kushner is to meet the Saudi crown prince, Mohammed bin Salman, in the Saudi city of Neom, and the emir of Qatar, Sheikh Tamim bin Hamad Al Thani in that country in the coming days. The assassination has so far been condemned by Bahrain, the United Arab Emirates, Qatar and Kuwait, but not by Saudi Arabia.