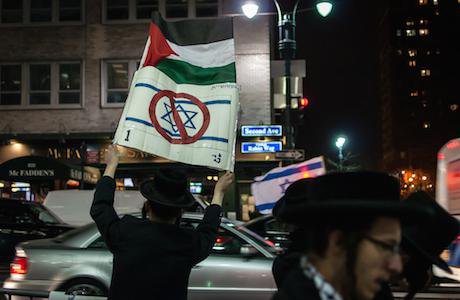 Last Sunday saw one of the most dramatic antisemitic incidents in the UK in recent years. A convoy of cars, flying Palestinian flags, drove through Jewish neighbourhoods in north London and their occupants were filmed shouting antisemitic and misogynistic threats (aimed at Jews, not just Israelis).

An upsurge in violence in Israel-Palestine is always accompanied by an upsurge in antisemitic incidents in the Jewish diaspora, including in the UK. As well as the convoy incident, we have also seen a number of others, including graffiti on a messianic Jewish synagogue in Norwich.

Many activists responded quickly in condemning the convoy and pointing out that such actions don’t help the Palestinians themselves (although some dismissed it as trivial or even as a “false flag” operation). But regardless of whether activists condemn it, such incidents will only deepen the suspicion many British Jews have that pro-Palestinian activism is irredeemably antisemitic.

Disagreements over whether the Palestinian cause disproportionately attracts antisemites, or even if it is intrinsically antisemitic, tend to be fractious and bitter. It is certainly hard to deny (although some do) that antisemitic discourse and violence has been propagated by some pro-Palestinian activists. There is also some evidence to suggest that anti-Israel views are correlated to an extent with antisemitic views.

One way to break out of this impasse is to see the antisemitism issue as the most visible manifestation of a much wider challenge: how to manage the consequences of the popularity of the Palestinian cause.

It’s not that “everybody” supports the Palestinians, or pays lip service to doing so. In “western” countries, support for Israel is deeply embedded on the right, as well as in the centre and centre-left (albeit the latter is often combined with support for a Palestinian state within the framework of a two-state solution). The current situation of the Palestinian people is proof enough that sympathy towards their plight is not universal enough to have actually led to a change in their circumstances.

When I talk about the popularity of the Palestinian cause then, I am referring not to the sum total of its impact, but to the diversity of supporters it attracts. And it is that diversity that leads not just to bitter conflicts over the place of antisemites within this disparate movement, but also to much wider – and rarely addressed – challenges in defining what international support for the Palestinians means.

Take the large demonstration held in London last Saturday. It was prompted by outrage at Palestinian suffering in Gaza, Sheikh Jarrah and elsewhere. Beyond that, what did it actually mean?

Social media quickly identified some of the most outrageous attendees – the far-right antisemite Michèle Renouf and two young men in Saddam Hussein T-shirts – but there was much more to the demonstration than that. Some protesters wielded Turkish flags, others held banners printed by the Socialist Workers party. Muslims played a prominent part in the march and there was also a Jewish contingent, but just pointing to the presence of Jews and Muslims does not do justice to the diversity present within both broad categories. The demonstration itself was organised by groups in which leftwing activists play an outsized role, such as the Stop the War coalition, as well as Muslim organisations such as Friends of al-Aqsa.

This diversity allows both supporters and detractors to derive their own meanings for the march: the presence of neo-Nazis, supporters of authoritarian regimes and Islamists can be seen as proof of the irredeemable corruption of the whole enterprise. Conversely, one could also point to the strong presence of one’s own type of activists as proof that they provide the inner meaning of the march: the strong turnout from leftwing activists (Jeremy Corbyn was one of the speakers) could allow supporters to see the wider cause as intrinsically part of the left.

All we can say with certainty about the march is that outrage bound it together, without any kind of unanimity of what the vision for Palestine (or Israel) should be. The danger posed by the diversity of this and other marches for Palestine is that those who participate will see themselves as legitimated for everything else they do too. The very visible presence of the Neturei Karta – a strictly orthodox anti-Zionist sect – at pro-Palestinian demonstrations, has often been leveraged as a way of “proving” that one’s own pro-Palestinian activism can never be antisemitic. And even if there is no evidence that the participants in Sunday’s antisemitic convoy attended Saturday’s demonstration, they may well have drawn succour from the protests across the world that they were indemnified for their actions in advance.

Effective politics requires collective action and cooperating with others in the pursuit of common goals. This raises complex issues over where that cooperation should stop, and how to prevent being used as a useful idiot by those with antithetical agendas. In the heat of anger and emotion generated by the current violence in Gaza, it is hard to engage with these questions, particularly in the midst of a demonstration. That’s why an honest reckoning with the tensions and differences within the diverse range of people who see themselves as pro-Palestinian needs to happen before the next round of violence.

Such a reckoning is long overdue, and it isn’t just about Jews and antisemitism. It also goes beyond the issue of Palestine. The actions of Bashar al-Assad in Syria and the Uyghur genocide in China are leading to increasingly bitter conflicts within the left over how to respond. It is becoming difficult for those who oppose Assad and the Uyghur genocide (or who were personally victims of either) to find their place within some parts of the “anti-imperialist” left.

Pro-Palestinian activism needs cooperation across ideological lines, and the first step is to recognise that those lines actually exist. That recognition can ground a clear-eyed, wary activism that resists the temptation to validate all of those who march alongside you.

The prize for this wariness could be an even broader and more effective campaign. I would march for Palestine if I didn’t worry about validating those whose wider agenda was antithetical to my own. And I am not the only one.