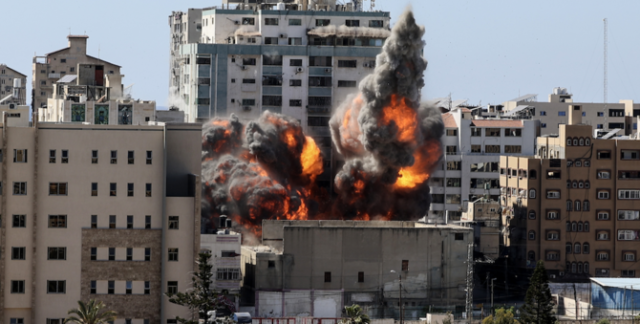 Pro-Palestinian protests are being organised across Australia for the second weekend running, as activists look to step up their efforts in light of escalating violence in the Gaza Strip and West Bank.

A wide range of groups are holding events in solidarity with Palestinians, including in Sydney, Melbourne, Wollongong, Perth, Adelaide, Brisbane, Canberra and Tasmania.

It also comes after a Global Day of Action organised by local activists, during which people were encouraged to post photos of themselves holding pro-Palestinian banners, and to send emails to their MPs, calling for the Australian government to urge for a ceasefire.

According to the Australian Palestine Advocacy Network, more than 15,000 people signed on to email their representatives, with campaigner Sara Saleh calling the support “unprecedented”.

“We wanted to be able to empower and support everyday Australians to take action on this matter in a way that allows them to directly engage with their local politician.”

“People have asked us, what can we do, how can we help? And this is how.”

“I’ve had people who’ve never engaged in the conversation or paid attention to Palestine become some of our biggest supporters because they see what’s going on, and they tell me you don’t need to have an understanding of the history to see what is happening.”

Politicians at both state and federal levels have condemned the escalating violence and called on the Australian government to call for a ceasefire.

Last week, the Parliamentary Friends of Palestine, headed by Victorian MP Maria Vamvakinou, said in a statement they were “deeply distressed” at the escalating violence and incitement in Jerusalem.

“Noting that several countries have raised objections to the violence – including the US – Australia should work constructively to support security and human rights to advance lasting peace in the Middle East.”

Saleh spoke at last weekend’s rally in Sydney, which was attended by thousands of people.

She said the groundswell of support across the country had energised her and her fellow activists.

“It’s hard to not feel angry at the situation, but that anger sits alongside hope. We draw on that and for me, I’m exhausted but I am very sustained and nourished seeing the response all over Australia.”

“It is unprecedented, we have people protesting from Darwin to Byron to Cairns to other smaller towns, and it gives me hope.”

She says the newfound enthusiasm has reflected a wider shift in the conversation both globally and nationally.

“What we’re seeing is a shift in the conversation, both on a global and local front. It’s been incredible to see. What is very important at this point is to continue centring Palestinian voices.”

“People are understanding and are feeling more confident in saying this isn’t a complicated issue, and we’ve seen a renewed energy and curiosity from people who are educating themselves on these difficult conversations.”

“It feels like a historic moment, there is really no going back.”

The petition, protests and social media campaigns come after a week of escalating violence in Gaza. Israel carried out a barrage of airstrikes on the strip after midnight on Thursday, destroying two houses in the territory’s south.

Since the fighting began 11 days ago, Palestinian health officials say 228 people have been killed, while authorities say the death toll in Israel is 12.

But local activist, author and academic, Randa Abdel-Fattah says that it isn’t the actual escalation in violence that has spurred more people into local activism, but the visibility of the conflict.

“The optics of that was something that galvanised people. The energy of the activism has changed because our ability to fight back on social media has also changed.”

Abdel-Fattah, a seasoned activist, said she’s sensed a change as a younger generation of activists come of age online.

“It’s a much younger generation who are instinctively sympathetic with the Palestinian struggle, who have access to information and can circumvent different narratives, who can connect with people in Gaza and see the videos for themselves.”