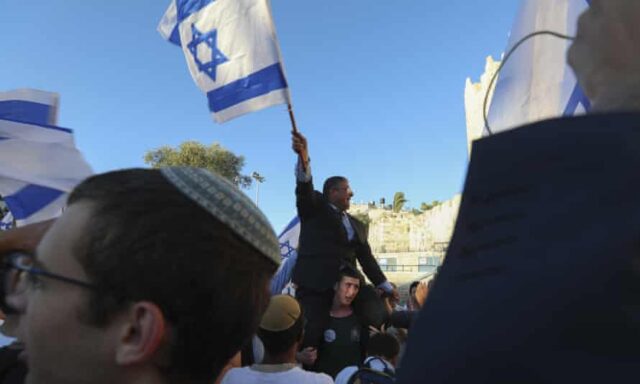 Israel has launched airstrikes on the Gaza Strip, the first since a truce ended 11 days of cross-border fighting last month, in response to incendiary balloons launched from the Palestinian territory.

The flare-up in violence, a first test for Israel’s new government sworn in three days ago, followed a march in East Jerusalem on Tuesday by Jewish nationalists that had drawn threats of action by Hamas, the ruling militant group in Gaza.

The Israeli military said its aircraft attacked Hamas armed compounds in Gaza City and the southern town of Khan Younis in the early hours of Wednesday, and was “ready for all scenarios, including renewed fighting in the face of continued terrorist acts emanating from Gaza”.

The strikes, the military said, came in response to the launching of the balloons, which the Israeli fire brigade reported caused 20 blazes in open fields in communities near the Gaza border.

A Hamas spokesman, confirming the Israeli attacks, said Palestinians would continue to pursue their “brave resistance and defend their rights and sacred sites” in Jerusalem.

Earlier in the day, Israeli police fired rubber-tipped bullets at Palestinians protesting against a march by Jewish ultranationalists through Arab neighbourhoods of Jerusalem, a provocative parade that threatened to damage the fragile Gaza ceasefire.

At one point, several dozen young men and teenagers, jumping in their air, chanted: “Death to Arabs!” Palestinian medics said Israeli police had wounded more than 30 people protesting against the parade.

Along the frontier inside Gaza, Palestinians also held rallies, with an unconfirmed report that an Israeli sniper shot one person in the leg. While no rockets were fired, militants attached incendiary devices to helium-filled balloons that floated into Israel, causing dozens of fires.

In Jerusalem, thousands of Jewish ultranationalists waving Israel’s blue and white flag made their way down to the Old City as a heavy police presence blocked off roads to prevent them from confronting Palestinians.

“We come to support Israel and say that Jerusalem is ours,” said Amitai Cohen, 50, as crowds chanted behind him. “And it’s supposed to be for Israel and not anybody else.” Several Israeli parliamentarians joined the parade.

The protests and airstrikes posed a test for Israel’s new government, which was sworn in on Sunday and is led by the far-right politician Naftali Bennett but includes parties from across the ideological spectrum, including an Arab party.

It will also be a test for the new US ambassador to Israel, former Morgan Stanley banker Thomas Nides, was appointed on Tuesday.

Mansour Abbas, whose small party is the first Arab faction to join a governing coalition, told a local radio station he was opposed to any “provocation”, adding that “anyone who has watched and followed this parade knows what its purpose is”.

Meanwhile, Yair Lapid, the country’s foreign minister, said in a tweet that the marchers who shouted “Death to Arabs” were a “disgrace to the people of Israel”.

A similar far-right parade last month – held to flaunt Israel’s control of the entire city – played a key role in building the tensions that led to the 11-day Gaza war. However, Tuesday’s march was less well attended and appeared more controlled by police.

Jerusalem is the emotional centre of a decades-old crisis. Israeli forces took over the holy city in 1967, including Arab neighbourhoods and the Haram al-Sharif complex, which houses al-Aqsa mosque – the third-holiest site in Islam. To many Jews, that compound is the Temple Mount, the holiest site in Judaism, and it is a deeply symbolic place for many Israelis. Christians also revere the city as the place where Jesus died.

Israel annexed East Jerusalem after the 1967 war and considers the whole area to be part of its capital, despite most world powers claiming the city’s status should be decided in a future peace deal.

Annually, Israelis celebrate the capture of Jerusalem in a parade, with flag-waving nationalists marching through the Old City. Previous events have seen participants angrily bang on shuttered doors as they descend through the Muslim quarter.

Organisers complain that they were unable to properly hold the march as they usually do on Jerusalem Day, which this year came amid a surge in tensions.

On 10 May, as a weeks-long police crackdown on Palestinian protesters and the potential eviction of families from the Sheikh Jarrah neighbourhood came to a climax, Israeli authorities decided at the last moment to reroute the march away from Arab districts.

However, the decision did little to calm an already spiralling situation. That evening, the parade was interrupted by air raid sirens after Hamas militants fired rockets – the opening salvo of what would become 11 days of intense fighting. More than 250 people were killed in Gaza and 13 in Israel before a ceasefire took effect on 21 May.

Fearing a renewed conflict Israeli police had changed the route to avoid the Muslim quarter. However, the planned march will still pass through other Arab areas. Bennett comes from a nationalist political bloc that considers the cancelling of the march as a capitulation.

Asked why he had come to the parade, one 19-year-old Israeli protester, Elkana Ithaki, said: “First of all, this question is simply very stupid. This is our country, this is our holy place. Why should be we be afraid to come here and raise our flag? Because there are some Arabs in Gaza who want to kill us? So what, they can just go to hell. We are stronger, we are in Israel, and we are not going to give up no matter what.”

Hamas had issued a statement calling on Palestinians to show “valiant resistance” to the march. It urged people to gather in the streets of the Old City and at al-Aqsa mosque to “rise up in the face of the occupier and resist it by all means to stop its crimes and arrogance”.

Separately, Mohammad Shtayyeh, the prime minister of the internationally backed Palestinian Authority, based in the West Bank, denounced the march, calling it a “provocation and aggression against our people”.